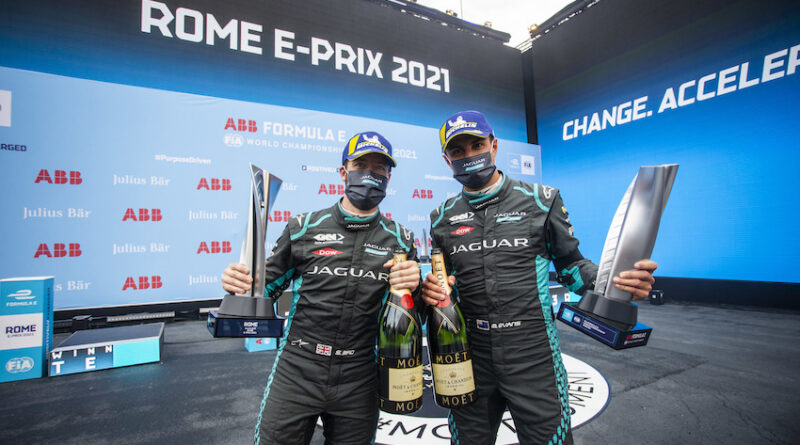 After a successful weekend last time out in Rome, Jaguar’s Sam Bird and Mitch Evans are hoping for more of the same in Valencia.

Having secured the teams first ever double podium in Formula E on the streets of Rome, Jaguar Racing now sits top of the team standings with Bird and Evans also leading the drivers table.

“If you had said to me before the weekend that you’re going to walk away leading both Championships and you’ve scored 18 points, I would have been completely happy,” Bird told EV Powered. “Knowing what happened and what transpired in Race 2, I wasn’t satisfied with a couple of things that happened and we missed out on a few points but that’s not the end of the world.

“As long as we maximise the next few races then I won’t be looking back on it with any disappointment. I think the team has been brilliant so far this year, which is why we are where we are. Overall, it was a really super weekend for Jaguar Racing.”

With the double podium in Rome placing the team at the top of both Championships, Mitch Evans claims the only secret to Jaguar’s success this season is hard work.

“There’s been no magic, just a lot of hard work and some refinements,” said Evans. “It’s all just sort of fallen into place. There’s a lot of work that goes in every season and every year you learn things. With Sam coming on board, that’s pushing me forward and the other side of the garage is getting more points which is good.

“It’s early days, we’re only three weekends into the season, but so far it’s been a tidy start. It’s now about keeping our heads together, keeping composed and getting results like in Rome and in Saudi.”

Bird added: “Jaguar every year has chipped away at this Championship and has just become stronger and stronger. I like to think I am a little bit of the ingredient it needed to maximise that potential. Everybody has worked really hard. Everybody is very ambitious and the teamwork between myself and Mitch has been really strong as well.”

Both Bird and Evans commented on the strength of their partnership and despite competing against each other at the top of the drivers table, the pair insists the team will always come first.

“It’s an interesting situation because we’re both drivers that have proven ourselves in the series,” said Evans. “I think we all know what Sam can do and I’m not oblivious to that.

“We both really respect each other which is important and, at the moment, our relationship is really strong and we’re really open with each other. I’ve been wanting a really strong teammate like Sam for a long time and now I’ve got the opportunity, so hopefully that’s going to enhance my performance and the performance of the team. We both know we can do the business, but we have to have the team in our minds first before we start worrying about the drivers’ Championship.”

Bird shares that belief: “Of course, there is an element of Mitch wanting to beat me because he’s judged against me directly and vice versa. At the end of the day, we’re both old enough and experienced enough to understand that in order for us to both do well, and for Jaguar to do well, we need to work together to the best of our abilities, and I think you’re seeing that on track. Away from that, I also like Mitch as a person and we get on well so it’s been pretty straightforward so far.”

For the first time in Formula E history, the teams will be heading to Spain this weekend and competing on what has typically been a testing track.

The Circuit Ricardo Tormo in Valencia is a world away from Rome, and Mitch Evans has is reservations over the circuit.

“It will be the first time we’ve raced on Valencia which is something we’ve wanted to avoid for as long as possible,” he said. “It’s exciting to have our first Spanish race, but from a track point of view it’s not very Formula E. We’ve gone from the complete opposite of Rome, where it’s one of the trickiest tracks in terms of layout and character.”

Bird said: “We’ve gone from one of the most exciting venues that Formula E has ever seen, to Valencia which is quite a wide race track. The whole point of Formula E is to take electrification and electromobility to the heart of the city centres and to showcase electromobility. I understand why we’re going to Valencia, but I will miss racing in the heart of a city because that’s where these cars belong and that’s where we can give the best spectacle.

“I really hope that we can put on a good show and I hope the fans enjoy it. It will be a very challenging circuit in terms of energy consumption, which means that the race pace might not be that quick. But we have two races in front of us, they could be really interesting and we need to maximise the amount of points we can score.”

Energy consumption is something that is sure to be on the mind of every single driver in Valencia, and Evans believes this could make for an interesting finale to both races.

“To manage that in the race and to not get carried away is going to be critical. I think we’re going to see a very interesting race and it may come down to the last corner or few hundred meters, just because of how extreme the energy saving will be. Normally that creates good racing, but we’ve never been in this territory before. I think we’re all unsure how this will play out but hopefully the modifications to the track will help and we’ll have an exciting race that Formula E always produces.”

Rounds 5 and 6 of the ABB FIA Formula E World Championship will take place on Saturday 24th and Sunday 25th April. EV Powered will also be reporting on all the action from both days so stay tuned for more updates.