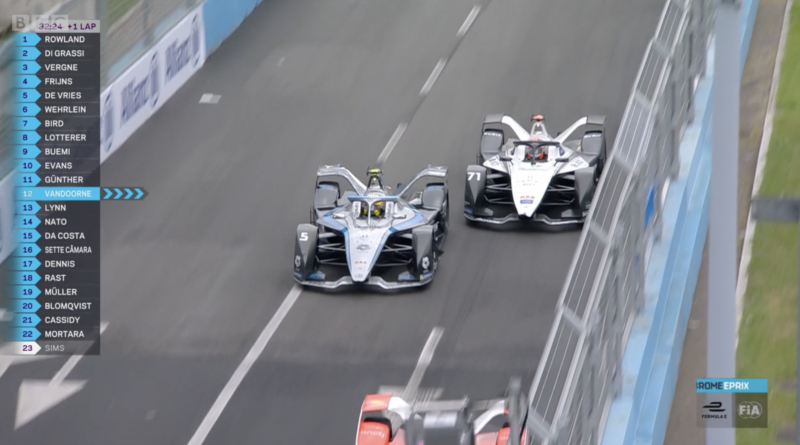 Jean-Eric Vergne (DS TECHEETAH) snatched first place in a hectic start to the Rome E-Prix weekend in an action-packed race that was filled with drama.

A slippery circuit produced a series of incidents which culminated in a decisive collision, involving Mercedes EQ’s Stoffel Vandoorne spinning into the barriers and allowing Vergne to speed into top spot as long-time leader, Lucas Di Grassi (Audi Sport ABT Schaeffler) failed to finish.

Jaguar Racing also benefited from the accident, with Sam Bird and Mitch Evans moving into second and third respectively, having started the race in tenth and twelth.

The Safety Car was deployed and brought an anticlimactic end to an otherwise enthralling encounter in the Italian capital.

Wet and slippery conditions had caused a number of spins and bumps throughout Free Practice and qualifying, which ultimately led officials to take the decision to start the race behind the Safety Car.

Once it pulled in, however, the action well and truly began as Porsche’s Andre Lotterer came together with Vandoorne, allowing Nissan’s Oliver Rowland to sneak in to lead the pack after five minutes.

The lead was short lived for Rowland however, as the Brit was handed a drive-thru penalty for an overuse of power, allowing Di Grassi to pull through and begin a tense battle with Vergne.

While the pack chopped and changed positions, Di Grassi managed to hold off the advances from Vergne while Sam Bird made steady progress with nifty pieces of maneuvering and the helping hand of the Formula E FanBoosts.

Envision Virgin Racing’s Robin Frijns had found his way to third, with Mercedes’ Nyck de Vries just behind in fourth.

Di Grassi took the plunge and triggered the use of one of his Attack Modes, nudging him down into third place but was aggressive in his pursuit and came in contact with de Vries as he made his way past him.

The aggression continued as Di Grassi touched Vergne in his attempt to make the most of another Attack Mode and to regain top spot.

Bird meanwhile was chopping his way through the pack and found his way to third, nipping in front of former teammate Frijns with a classy overtake.

Di Grassi slipped into first position again as took advantage of Vergne’s cautiousness over the prospect of an extra lap at the end of the race.

Round 3 was building to a dramatic conclusion and it exploded into life as Di Grassi had to slow due to a technical error which forced the two Mercedes into each other and drove Vandoorne into the barriers.

Di Grassi’s race was over but it was a much-welcomed gift for Jaguar Racing as Bird and Evans pierced through the muddle of vehicles to make their way into second and third behind Vergne, who eased to victory as the Safety Car was deployed and crossed the line to draw a close to the first race of the weekend.

The result sees Sam Bird remain top of the Drivers’ standings ahead of Frijns and de Vries, and Jaguar Racing, which claimed its first ever double podium, kept its place at the top of the Teams’ table.