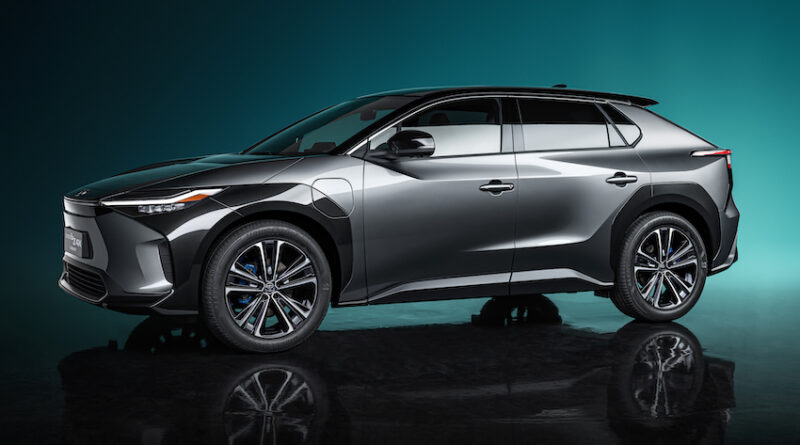 Toyota has released concept images for its new fully-electric BZ4X, the first in a series of zero-emission battery electric vehicles planned by the brand.

The Toyota bZ4X marks the start of the manufacturers commitment to launching 15 pure-electric vehicles by 2025. Details such as price, battery and range have yet to be announced, but the models are said to be available from the middle of next year.

Without the mention of specific details, Toyota has said a larger, more powerful battery has been engineered for reliable, lasting performance, maintaining the car’s driving range, even in cold climates.

It will be built on the new e-TNGA modular platform, developed in collaboration with Subaru and specifically for electric vehicles.

As its name suggests, the bZ4X will be the first vehicle released as part of Toyota’s ‘Beyond Zero’ strategy of producing 15 battery electric vehicles, including seven Toyota bZ models.

The design for the bZ4X “draws on the rich off-road heritage and expertise of Toyota and Subaru,” according to the manufacturer.

The front of the car dispenses with the familiar grille and instead features an arrangement of sensors, lights and aero elements which gives it a distinctive “hammerhead” look, in the words of Toyota. A full-light strip is included on the rear as with most electric cars, and a series of creases throughout give the car a sharp, pointed look.

A long wheelbase and short overhangs helps create a spacious cabin, which also includes an advanced steer-by-wire system and a “world-first” steering yoke for greater control by removing interference from rough road surfaces and braking.

Chief engineer, Koji Toyoshima, commented: “This is not just about contributing to the environment by being a zero-emission vehicle but giving value ‘beyond Zero’ emissions by making driving easier and more fun.

“Our target customer is someone who places importance on time spent together with family and friends. When they want to enjoy such times, Toyota bZ4X Concept can serve as a hub for them.”