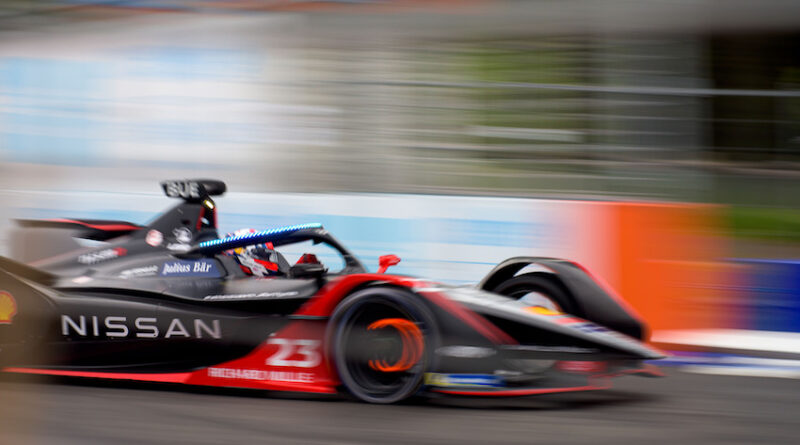 Speaking exclusively to EV Powered, Nissan E.Dams’ Oliver Rowland talks about a disappointing weekend in Rome, why the Valencia E-Prix will be one of a kind and his hopes of clinching the Formula E Championship.

After a promising start for Rowland on the streets of Rome last weekend, a mixture of ill-fortune, difficult conditions and a new circuit layout meant the Brit left the Eternal City with just a single point to his name.

“It was a disappointing one,” Rowland told EV Powered. “On pace over the weekend I was one of the fastest but unfortunately, nothing seemed to go our way which can happen in motor racing.

“The penalty in the first race was disappointing because we were on course to win or at least be on the podium. We weren’t anything special in qualifying on the Sunday but the groups got faster as well, so I think  we did not fully show our potential but that’s part of Formula E and you just have to come back next time a little bit stronger.”

Although Rome hadn’t gone as he would have hoped, Rowland says his attention is now firmly fixed on the next E-Prix in Valencia, where Rounds 5 and 6 take place on April 24th – 25th.

“I think it’s important that we get back and we do a good job,” Rowland said when asked about his mentality for next weekend. “It’s quite an intense part of the season and you need to recover but I’m a very positive person. With the speed we’ve shown through practice and qualifying and through race one, we’re as good as anyone.

“I think, on average, I was probably the best of all three days. On that side I’m positive, I’m happy and I can’t wait to get out there again. Having said that, Valencia is completely different in terms of its layout so whether it suits us or not, we’ll soon see.”

The Circuit Ricardo Tormo in Valencia has previously been used as a testing track for Formula E, and the drivers were able to get a feel for it as recently as December. However, the circuit has changed slightly since then and Rowland expects it to be one to watch.

He said: “It will be an interesting one. I don’t think qualifying will mean a lot and the race is going to be more like a Moto3 race where everyone is slipstreaming each other and nobody will want to lead, that’s for sure, as it’s not efficient to stay out in front without the slipstream.

“I don’t really know what to expect. The first race is going to be completely new for everybody and I don’t think we’re going to experience a Formula E race like it. The course has changed slightly from testing, so once I’ve properly driven the track then we’ll see, but I’m looking forward to it and we’ll see how we get on.”

With only one point registered from Rounds 3 and 4, Valencia comes at an important time for Rowland who hopes to push for the Championship this season with Nissan.

“I want to try and challenge for the Championship, I don’t think there’s any reason why I can’t,” Rowland said. “If you look at qualifying, I’ve had three poles in my group and one Super Pole and one second, so on that side of things I feel good, so I’m pretty confident.

“If you look now, it’s one race win and you’re leading the standings. It’s disappointing to have missed out on the points we feel like we deserved, but this is Formula E, sometimes you end up in a better group in the next race and you have a slight advantage in qualifying. But I want to be challenging for the Championship, that’s for sure.”

While Rowland continues to push for his first ever Formula E Championship, his Nissan teammate this year certainly knows a thing or two about winning. Racing alongside the Brit this year is Sebastian Buemi, the ex-Formula 1 driver who holds the record for the most FE wins and has a Championship next to his name too, having come out on top for Renault in the 2015-16 campaign.

Rowland hailed the influence of his teammate and FE veteran, who he says has taught him a lot in their time together.

He said: “Having someone like Seb as a teammate has been quite eye-opening in terms of the amount I’ve learnt and also getting to know him as a person.

“I remember when he was in Formula 1 and I was particularly young at the time, so to all of a sudden be a teammate of a Formula 1 driver that you’ve grown up watching is quite different but it’s great. Away from the track we get on really well, we have a good relationship and he’s a top guy and we have a lot of fun. I have a lot of respect for him and I think that’s grown on his side too since I’ve been at Nissan.”

While FIA president Jean Todt hit out at the media for not focusing enough on Formula E, Rowland believes the nature of the sport itself will be enough to capture the attention he feels it deserves.

“For me, if I tune in and watch a Formula E race as a neutral, I would love it. Anybody can win, there’s quite a lot of crashing and it’s a really fun event that happens.

“From my perspective as a driver, I just enjoy the competition but it’s already out there on the map and I think it deserves to be. I think the racing speaks for itself and people enjoy watching it. Obviously you’ve got your petrolheads that don’t always like the electric side of things, but we put on a good show and that speaks for itself.”

With a hunger to right the wrongs of a disappointing weekend in Rome and with his sights set firmly on the Championship, Rowland is sure to be at the heart of the action once again in a weekend that promises to be yet another classic.