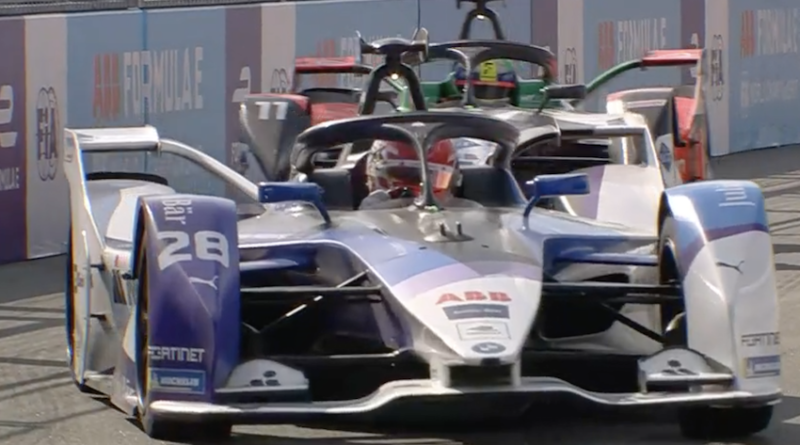 BMW i Andretti Motorsport’s Maximilian Guenther claimed his first win of the Formula E season with a perfectly measured drive on the streets of New York.

Having started in fourth position on the grid, Guenther calmly worked his way to the top spot to finish ahead of previous New York E-Prix winner Jean-Eric Vergne of DS Techeetah and Audi’s Lucas Di Grassi.

Envision Virgin Racing’s Nick Cassidy had qualified in pole and had led for much of the race, but eventually slipped down and out of the podium places to finish in fourth, just ahead of his teammate Robin Frijns.

The result still sees Edoardo Mortara of ROKiT Venturi Racing leading the drivers’ standings ahead of Robin Frijns DS Techeetah’s, with Jean-Eric Vergne having now climbed into third place with his podium.

It was an eventful start to the first round of the New York E-Prix, as Cassidy’s first job as polesitter was to defend early advances from Vergne and Mahindra Racing’s Alex Lynn, who locked up heading into Turn 1 and slipped back into fifth.

Eager to atone for his error, Lynn triggered his first Attack Mode but was forced to slow in order to avoid contact with di Grassi and Porsche’s Pascal Wehrlein in fifth and sixth.

Leader Cassidy had built a steady lead and had also triggered his first Attack Mode without losing any ground. With 15 minutes gone, it looked to be going perfectly to plan for the Kiwi.

It seemed to be a fairly steady race up until that point, however, Lynn was the centre of attention once again as Werhlein clipped his rear end in an attempt to make the Attack Mode activation point, sending Lynn spinning and bringing the German’s race to an early finish. It was reckless from Werhlein, and Lynn lost a place to Oliver Rowland as a result.

Many of the Championship frontrunners had struggled so far in the Big Apple, with leader Mortara struggling in 21st, with Mercedes’ Stoffel Vandoorne and Audi’s Rene Rast also towards the back of the grid.

However, Jaguar’s Sam Bird had mounted an incredible recovery drive, punching his way up to 13th having started from 20th and shouldering the responsibility of picking up points for his team after Mitch Evans retired due to a technical fault.

As the chasing pack chopped and changed positions, Cassidy had maintained his lead and with most of grid having used both of their Attack Modes, it looked to be a run in to the finish line.

However, Guenther was beginning to see the benefits of managing his energy perfectly throughout the race, the German started crawling closer and closer to Vergne and Cassidy.

While a minimum podium-finish looked to be on the cards for Guenther, it was heartbreak for his teammate Jake Dennis, with his car giving up on him just as he found himself in the points. It was a gift for Bird, however, who took his space to round off an incredible comeback.

With just 1.5 seconds separating the top three, Cassidy looked to be holding on but the Formula E FanBoost was gifted to Vergne.

The Frenchman used his extra shot of power to muscle his way past Cassidy but the pair ran wide on the hairpin and Guenther, lurking in the shadows, saw his gap and nipped into the lead with the clock running down.

Vergne had managed to hold onto his podium but Cassidy, who had led for so much of the race, now found himself behind di Grassi who had made the most of the fallout and jumped into third.

Guenther kept a cool head and crossed the line to claim his first victory of the season and became the ninth different winner from ten races so far this season.

Round 11 of the Formula E World Championship will also be in New York and will take place live on the evening of Sunday 11th July.