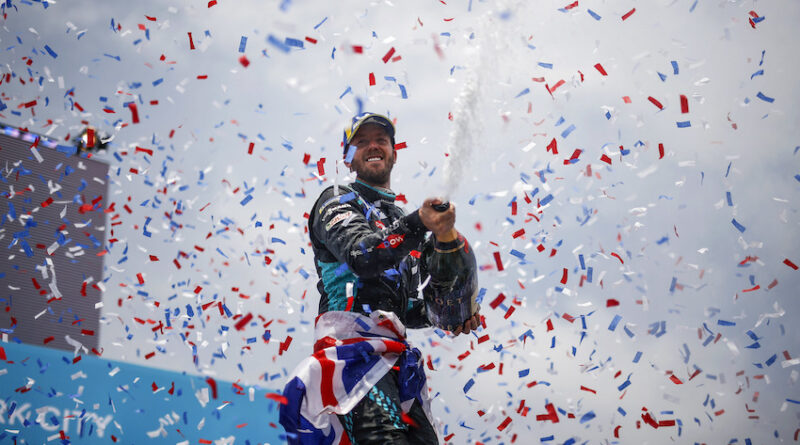 Jaguar Racing’s Sam Bird led from start to finish in the New York City E-Prix, catapulting him to the top of the Drivers’ standings.

The result rounded off an impressive weekend for the Brit, having recovered from a disappointing qualifying session on the Saturday to register points in Round 11, before taking the top spot on the podium on Round 11.

It could’ve been a fairytale one-two finish for Jaguar, but Bird’s teammate Mitch Evans suffered severe damage to his car as he battled to retain his second position.

Envision Virgin Racing’s Nick Cassidy eventually came in on second, a great relief having led for much of Round 10 in New York, only to slip out of the podium positions right at the death. DS Techeetah’s Antonio Felix da Costa finished third, pushing him up to second in the Drivers’ standings.

Commenting on his victory, Sam Bird said: “What a day today! That’s 29 points out of a possibly 30 so I couldn’t be happier. I’m so delighted and proud of my team right now. After yesterday, this is everything we needed and it feels so good. Thank you to everyone at Jaguar Racing and I can’t wait for London.”

Having struggled on the streets of New York City in qualifying on the Saturday, Bird got to grips with the track and was dominant in qualifying, as was Mitch Evans who placed just behind him in second.

Whilst Evans endured a nervy start after locking up heading into the first turn under pressure from Cassidy, Bird calmy navigated the first set of turns to build a comfortable lead out in front.

It was a complete contrast of emotions for DS Techeetah’s Jean-Eric Vergne, who had finished second in Round 11 but having already broken down in qualifying, a technical fault left him stranded at the start line unable to move, and his race was over before it even began.

BMW i Andretti’s Jake Dennis was at the centre of attention next. Having qualified in 19th and eager to make up the places, Dennis had aggressively pushed himself up to around the top ten positions, but soon came into contact with ROKiT Venturi Racing’s Edoardo Mortara, sending him spinning away.

As the race stretched on, Bird and Evans demonstrated incredible teamwork as they were synchronized in their use of Attack Mode, and Evans allowed Bird back through to keep his position at the front, and Evans assumed the role of moving roadblock in order to keep the pressing Cassidy at bay.

However, as Cassidy had triggered another Attack Mode, he was able to finally find his way past Evans into second. Eager to respond, Evans triggered his final Attack Mode and regained his position behind Bird, setting the fastest lap in the process.

There was more commotion behind the leaders, as Audi’s Lucas di Grassi spun Nissan e.dams’ Sebastien Buemi, with the Brazilian receiving a 10-second penalty as a result.

Bird, Evans and Cassidy had been battling it out for the majority of the race, but Antonio Felix da Costa had worked his way into the mix and was lurking with intent behind the leading pack.

With a FanBoost to his advantage, Da Costa engaged his extra power but Cassidy had fought well to hold him off, despite taking a bit hit to his energy usage.

Evans was now having to contend with not only Cassidy fighting for his position but a hungry Da Costa, too. With the pressure mounting, Evans devastatingly clipped the wall on Turn 4, sustaining serious damage and shunting him back down the grid to sixth.

The mishap had paved the way for Cassidy and da Costa to move up, but that soon turned into a battle for second and third as Bird had pulled away.

Evans was slowly dropping further and further behind, eventually crossing the line in 13th, a huge disappointment having been right behind Bird for the majority of the race.

Although there was disappointment for Evans, Bird was delighted to pick up his second win of the 2020/21 season, a victory that shoot him to the top of the Drivers’ standings heading into the London E-Prix.

Rounds 12 and 13 of the ABB FIA Formula E World Championship will take place in London on 24th and 25th July.