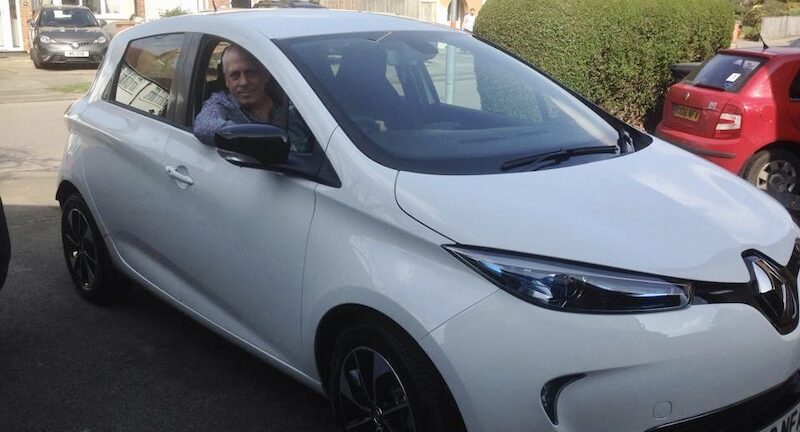 Bob Foster from Northamptonshire talks to EV Powered about his Renault Zoe and why he decided to turn electric in 2019.

Tell us about your EV?

I have a Renault Zoe, the base model from 2019. This was my first electric vehicle and I bought it back in March 2019. I had been looking to see when the time would be right to buy an electric car for a couple of years prior. I was convinced to turn electric when the cheaper cars started coming out which could do 200 miles, which was a feature for the Zoe, which could do had a range of around 180 miles and was available for £22,000 at the time.

I had also been able to use the EV Experience Centre in Milton Keynes, which allowed me to try an electric car for a week before making my decision. I had a Zoe from the Centre and that ultimately convinced me to buy one.

Working in Milton Keynes as well, I became aware of just how prevalent electric vehicles were going to become, with all the electric charging points. That also gave me confidence to make the switch to an electric car.

What do you like about the exterior of your car?

That wasn’t too important for me when choosing the car. I was more focused on the range on the price. The Zoe is a little too ‘boxy’ for my liking, but it has retained some of the typical Renault curves which I do like. I wouldn’t have chosen a white car either, but I had to go with that option as I was at the limit of my price range.

What about the inside?

For the class of car, I was pleasantly surprised with the amount of space in the boot. I’m able to fit a few suitcases in there. The front seats are very spacious, the back seat legroom is adequate which is better than I would have expected. I thought they would have been tight but there is more room than you’d think in the back there.

The driver controls are very straightforward and easy to use. Having driven the car for two years now, I’m accustomed to all the controls but I do remember it being a very easy car to get to know.

What do other people think of your car?

My wife likes the car a lot. She really enjoys the smooth ride; she has no issues about the distance to travel and she thoroughly enjoys riding in it.

It’s also got good all-round visibility, which I think is unusual at the moment with cars. In the Zoe, you still get good vision even out of the back windows.

What don’t you enjoy about it?

There’s limited interior storage space. There’s no real room to store the user manual for the car and the door bins can just about hold a big bottle of water, so there’s not much room to store anything else. It’s a small thing but it is quite frustrating.

One thing I am disappointed with now is the charging capability, as it only came with the type 2. The more modern version you can get with a fast-charge option as well. While I’m at home, there’s no problem as I can charge it to full in four-and-a-half hours. When you’re out and about however, what you want is to be able to get your 0-80% in the time it takes to sit down and have a cup of coffee.

If you could go back to when you bought the car, would you go for something different?

I might have held on for another three months and gone for the version which came with the 245-mile range. Other than that, I would still have chosen the Zoe and that’s purely down to the price of the car, range and comfort.