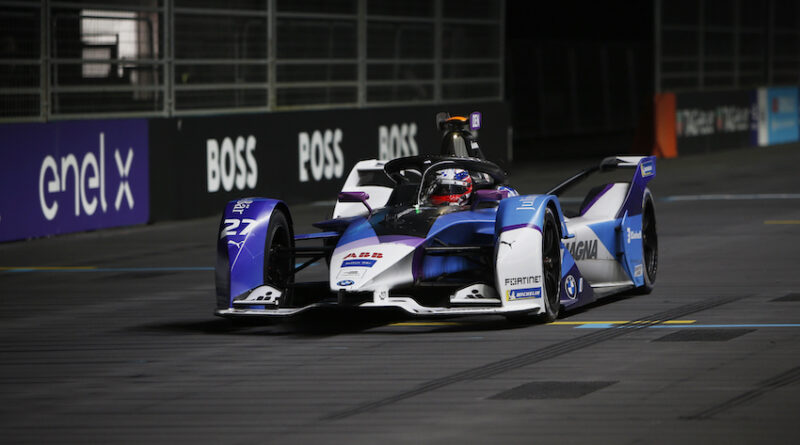 BMW i Andretti Motorsport’s Jake Dennis claimed his second win of the season with a masterful drive on home soil in the London E-Prix.

Having qualified in second place behind fellow Brit Alex Lynn of Mahindra Racing, Dennis knew he was quicker than his compatriot from the early stages and seized his moment to claim his second win of the season.

Lynn managed to hang on to a podium place but missed out on second after Mercedes EQ’s Nyck De Vries who picked up some much-needed points after a difficult run of form.

Despite initially finishing in fourth and tenth, Nissan E.Dams Sebastian Buemi and Oliver Rowland were disqualified after the race for an overuse of energy.

The win lifts Dennis up to third in the Championship and caps a great period for the BMW team with teammate Max Guenther taking top spot on the podium in New York.

Right from the off, Lynn was defending the advances from Dennis who was keen to make the most of his first Formula E race on home soil.

However, it was Lynn’s teammate, Alexander Sims, who was the first casualty of the peculiar London circuit as he was squeezed into the barrier on Turn 5, picking up damage which proved to be terminal.

That was one Brit down out of the seven that lined up on the grid, and Jaguar Racing’s Sam Bird soon followed Sims back into the pits after a nudge to his rear tyre, a massive blow to the Championship leader who was so eager to impress in his home race.

It was a disaster for Jaguar as Mitch Evans was also forced into the pits for urgent repairs to his front wing. Fortunately, he was able to return to the race but was some way off the rest of the pack once he re-joined. It was Jaguar’s first race on home soil for 17 years and it couldn’t have gotten off to a worse start.

It was a tight and cagey affair after the first few incidents, with many of the drivers’ seemingly cautious of the wet conditions and the unusual track layout.

As Lynn and Dennis peeled away from Nissan E.Dams’ Sebastian Buemi in third, the leading pair both opted to trigger his first Attack Mode of the race, giving him an extra 35kW of energy for eight minutes instead of the typical four.

Behind them, a battle was erupting for third place, with Nyck De Vries leapfrogging the Brazilian pair of Sette Camara and Lucas Di Grassi, who were in a tussle, one which Di Grassi ultimately won by shooting up the inside and into sixth position. Camara failed to recover from the sequence and slipped further and further down the pack, winding up in 12th just two laps later.

Back up front, Lynn opted to take his second Attack Mode of the race but unlike last time, Dennis held off to take first place and whilst Lynn was hot on the BMW’s tail, he locked up approaching Turn 10, giving Dennis, who still had an extra eight minutes of Attack Mode to utilise, some much needed breathing space. With a two second lead, Dennis was able to trigger his power boost and retain his lead; the best possible position for the Brit to be in.

Meanwhile, De Vries continued his forward assault, marching his way up into third after triggering his second Attack Mode. Whilst he came out behind both Lotterer and Buemi, who had both made the move for their power boost, Lotterer had failed to make the activation loop and therefore missed out on the Attack Mode. With the extra power advantage, De Vries was eventually able to work his way past his two rivals and found himself in the podium places.

Dennis began to peel away from Lynn, who all of a sudden found himself staring at the back of Nyck De Vries’ Mercedes EQ after the Dutchman triggered his extra 20% of power thanks to the Fanboost. Having started on pole, it was turning into a disappointing afternoon for the Mahindra team.

From there on, Dennis seemed to be getting quicker and quicker and was soon miles ahead of the chasing pack, comfortably crossing the line to claim his most memorable of Formula E victories in the return to London.

Whilst there looked to be decent points on the board for Buemi and his teammate, Rowland, who crossed the line in 10th, the pair were later disqualified for more then the regulated 47kWh of energy.

With Da Costa being bumped up in the order, he now sits in second in the Championship behind Sam Bird, with Dennis now in third.

The teams will be battling it out once again on London’s docklands tomorrow in Round 13 of the ABB FIA Formula E World Championship.