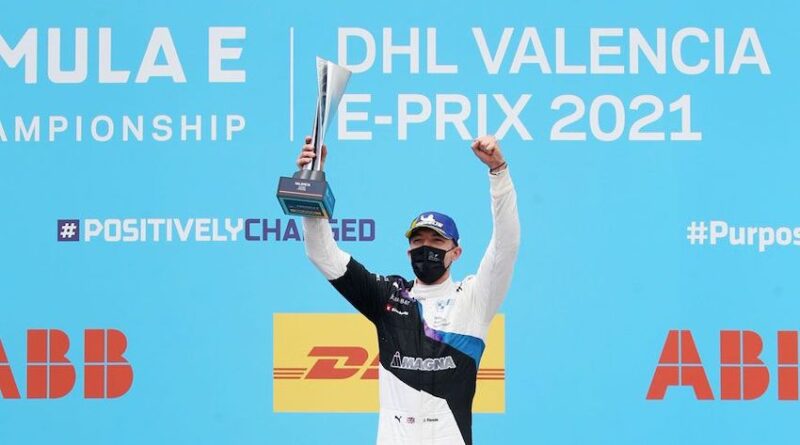 BMW i Andretti Motorsport’s Jake Dennis believes the upcoming London E-Prix could be the highlight of the Formula E season.

Following a weekend of action in New York City, Formula E is preparing for the London E-Prix, which will take place on the bank of the River Thames and will be the first race of the series to feature a part-indoor circuit.

The drivers will be racing at the iconic Royal Dock, incorporating both the inside and outside of the ExCel centre – a first for top-level international motorsport.

Whilst his weekend in the Big Apple didn’t go to plan, BMW’s Jake Dennis is looking forward to racing on home soil and believes the London E-Prix could be a highlight of the season.

He said: “London is always special and it’s such a special city. It’s so iconic. it’s my home race so it’s always going to be a highlight for me. When you say we’re racing on the streets of London, mixed with the fact that some of it is in the ExCel arena where a sector of it will be indoor, it’s a whole new ball game and it’s got all the ingredients to be one of the best races of the season.

“We’ve got quite a few Brits in Formula E too, so we’re all looking forward to it and then we’re not far off from wrapping up the Championship.”

With just two more race weekends left, Dennis is approaching the end of his very first season in Formula E. Whilst he says he has thoroughly enjoyed his first season in the Championship, Dennis adds that there have been some big challenges and a lot to learn.

He said: “One of the most challenging things in Formula E is not knowing any of the circuits. It’s so difficult on circuits that you don’t know when other people have driven them four or five times, so you’re definitely on the back foot. Monaco for example, you’ve got the likes of Sam Bird who has driven that probably eight or nine times, and we’re just getting chucked in at the deep end and doing it all in one day.”

Whilst he may be playing catch up with some of the more experienced drivers on the grid, Dennis explains that he has a good relationship with a lot of the other stars of Formula E and that he has been able to learn from them throughout his first season.

He said: “When I first joined, it was incredible to see the level Formula E had got to. We’ve got some really high-level drivers now and it’s nice to put my name up against them and even beat them.

“It’s part of the experience and it’s a challenging but enjoyable learning curve. We’ve had our ups and downs, but it’s been enjoyable and a good experience so far.”

One of the ups of Dennis’ season was Round 6 in Valencia, where he led from start to finish to claim his very first podium and very first win in Formula E.

Although Dennis’ one and only win in the series so far came on a permanent racetrack, he is clear that Formula E belongs on the streets and is excited by the nature of the circuit in London.

“Formula E is designed and has been built up around racing in street circuits,” he said. “When you go to a big, open circuit like Valencia, it’s very much an energy-limited race and you can only push so hard because you have to save so much energy. Whereas the street circuits are energy limited, but you still need to push incredibly hard to be fast. That’s what makes the street circuits so exciting.

“I think London is going to be a whole new ball game. The circuit looks extremely tight. I don’t think it will be an energy-limited race at all. If everything stays as it is, it will very much be a flat-out race and there’ll be zero energy saving, which will be completely new for Formula E. It’s still being evaluated now, but it’s Formula E and it’s still going to be exciting either way.”

Another feature of the London E-Prix which excites Dennis is the prospect of racing in front of fans again. Due to the pandemic, fans have only been able to attend the last three rounds of racing, but a small number of spectators will be allowed into the ExCel to witness the return of Formula E to the capital.

Whilst being behind the wheel of an FE car requires tremendous levels of concentration, Dennis explains that drivers can still feel the effect of the crowd.

“They definitely have an impact,” he said. “Every driver will always spot a busy crowd in the corner of their eye when they’re driving and in Formula E you can actually hear the crowd if there’s a big situation like a crash or a race-winning overtake; you can actually hear the reaction through your helmet, which I don’t think you can get in any other racing category.

“Having a crowd in any sport is always better and even though we’re racing at high speeds and we’re tunnel vision, you do notice the crowds and it’s nice to have them back that’s for sure.”

With the season coming to a close, Dennis has already got his eye on next season and the provisional calendar that has been released by the FIA.

He said: “I went to South Africa in 2019 for a week in Cape Town, so that’s definitely one of the events I’m super looking forward to and I’m excited to see the street circuit for that. I’ve always wanted to go to Canada so Vancouver will be exciting. Back to Monaco, as well. That’s good for Formula E as it’s usually one year on, one year off, whereas now we have our booked slot for Monaco. Even though New York didn’t go great for me, it’s an incredible city and I loved it.

“It’s an all-round top-notch calendar and I think Formula E should be very proud of being able to race all around the world.”