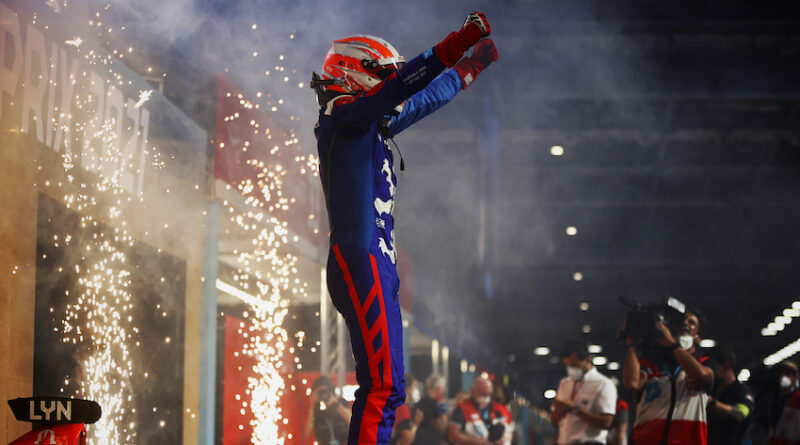 Mahindra Racing’s Alex Lynn made it a weekend to remember as he claimed his first-ever Formula E race on the streets of London.

The victory followed a podium in Round 12, with the Brit clearly felt at home racing alongside London’s famous docklands.

The Mahindra pipped Mercedes Nyck De Vries and Jaguar Racing’s Mitch Evans, who was even surprised himself to have finished with a podium after a topsey turvey afternoon.

Round 13 was certainly unlucky for some, including Mercedes EQ’s Stoffel Vandoorne, who had qualified in pole and was leading well until Nissan’s Oliver Rowland took him out and sent him down the grid. It was one of many incidents which occurred in an action-packed race.

De Vries is pushed back up to top spot in the Drivers’ Standings with his second placed finish ahead of Envision Virgin Racing’s Robin Frijns, who is yet to win a race this season.  Sam Bird now sits third in the standings after a disastrous weekend on home soil.

It was a great start for Mercedes, with Vandoorne pulling away and De Vries jumping in front of Alex Lynn in third to sandwich Rowland in second.

The first of many incidents took place further down the pack, however, with Championship rivals Sam Bird and Antonio Felix da Costa running alongside each other in the tight and twisty section of the circuit. With both drivers qualifying towards the back of the grid, they were clearly eager to make their way up the field by any means necessary.

The hairpin was causing chaos in the early part of the race, and it was the turn of Nissan’s Sebastian Buemi and Audi’s René Rast next, with the two butting into each other. Whilst Buemi recovered from the incident and moved to within touching distance of the point scoring places, East’s race was run.

The incident brought out the Safety Car, however, and Vandoorne’s sizeable advantage was reduced.

As the Mini Pacesetter pulled in though, Vandoorne saw an opportunity to get the jump on Rowland, slowing down into the corner before pelting away onto the straight and leaving Rowland and the rest of the chasing pack cold footed.

Just as soon as the Safety Car pulled in, it was on its way back out again as da Costa said hello to the wall on Turn 1 following contact with Porsche’s Andre Lotterer.

With the cars bunched up approaching the indoor straight, the race’s major talking point took place as Audi‘s Lucas di Grassi, who was sitting in eight, pulled into the pit lane and appeared to stop briefly, before rejoining at the very front of the pack.

It was a sly move and di Grassi may have thought he’d gotten away with it, but he was soon hit with a drive through penalty following an invitation.

That decision resulted in what will surely be one of the most memorable moments in Formula E history. Eager to contest the decision, Audi’s team principle Allan McNish was caught sprinting down the pit lane to find the stewards.

Di Grassi ignored the decision and continued to lead the race, and the drama was set to continue.

As Vandoorne looked to regain his lead, Rowland was also looking for his gap to jump in front of the Belgian. He misjudged his attempt though and went careering into the side of Vandoorne at the double hairpin.

The mess allowed De Vries to nip into second and then first as Di Grassi triggered his Attack Mode.

Rowland was slapped with a ten-second penalty for the incident and Vandoorne found himself just outside the point scoring positions as a result of the skirmish.

Still ignoring his penalty, Di Grassi used his extra power to sprint ahead of De Vries into first again. Mahindra’s Alex Lynn also had extra power to his advantage and was able to get in front of De Vries, who had failed to capitalise on his use of Attack Mode.

Jaguar’s Mitch Evans was becoming more involved in the race but not for the right reasons. Whilst he was just behind the top three, he gave up that position to a surging Robin Frijns after his missed the activation zone for his Attack Mode, and had to wait for the next lap to trigger it again, costing him valuable time.

Evans spoke after the race and said his performance was mixed and that certainly seemed to be the case as just after his costly error, he executed a world-class dummy to shoot up the inside of Frijns and restore his position.

Despite his earlier skirmish with Da Costa, Sam Bird was making decent progress from the back of the grid, battling his way to 11th.

With the scent of points lingering, the Brit was too eager to burst past Norman Nato and speared into the side of him in a bid to get up the inside.

The pair were wedged against the wall and Bird’s hard work was undone in a split second – the race was finished for the pair of them.

Di Grassi had still not served his drive through penalty and showed no intention to do so, leaving the officials no choice but to wave the back flag at the phantom-leader, meaning Lynn, De Vries and Evans would inherit the top three places once they crossed the line.

Lynn was audibly ecstatic in claiming his first ever Formula E win, especially on home soil. The team behind him at Mahindra were also overjoyed, with team principle Dilbagh Gill Visible emotional.

Finishing behind the front three were Frijns, Werhlein, Guenther, Cassidy, Di Grassi (after a time penalty was added), Sette Camara and Dennis.

Formula E heads to Berlin next for the season finale which takes place on 14th – 15th August.