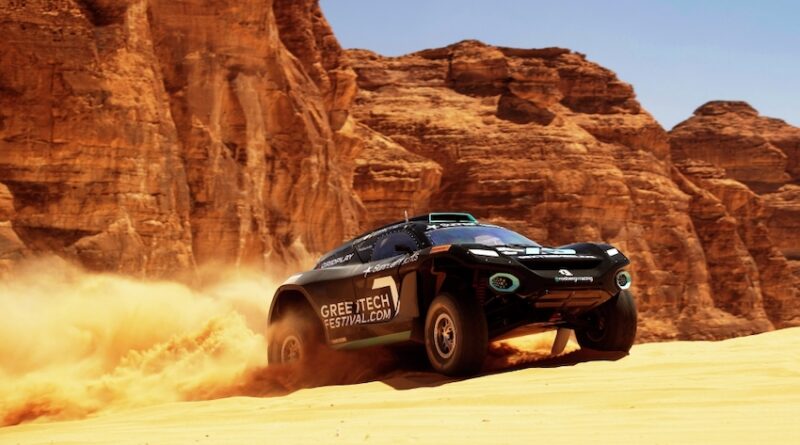 Extreme E will head to Lac Rose, Dakar on the West African Senegalese coast this weekend for the series’ second X Prix event.

Rosberg X Racing (RXR) took victory in the inaugural X Prix last month in the Saudi Arabian deserts, but with the top three teams within seven points of each other.

This weekend, the teams head to Lac Rose in Senegal, and situated 37km from the capital, Dakar, the shores of Lac Rose hosted the finish of the world’s most famous cross-country rally – the Paris-Dakar – on numerous occasions between 1979 and 2007.

Nine teams and 18 drivers will compete, but in a slight change to the Saudi Arabia race format, the final will be a four-car battle, with two teams from each of the two Semi-Finals progressing to the concluding race of the weekend.

Like the Desert X Prix, Qualifying consists of two rounds of time trials. The team starting order is decided by a draw for Qualifying 1 and Qualifying 2. All races feature two laps with the incorporated driver ‘Switch’ feature.

Teams can also benefit from a HyperDrive boost available to each driver on each lap of the race. Activated when the driver presses a button on the steering wheel, they will enjoy an extra push of continuous power for a few seconds.

New for the Ocean X Prix is the ‘Super Sector’ – a part of the course where the fastest driver in that section over the weekend will earn five points for their team. This ensures that whatever position the teams find themselves in there is always an incentive to push to the limit as points are up for grabs.

The world-class team and driver line-up below, will all be behind the wheel of the ODYSSEY 21 – a 550 bhp all-electric SUV charged using zero-emission hydrogen fuel cell technology.

Commenting on the upcoming weekend of racing, Alejandro Agag, founder and CEO of Extreme E, said: “I am delighted to be back in Dakar, a place with a vast motorsport heritage, and I can’t wait to see our world-class line-up of drivers compete on this latest course we have devised. The Desert X Prix delivered some truly thrilling racing with a stunning backdrop and I’m sure Senegal will provide the same.

“But in Lac Rose we find an area suffering at the hands of the climate crisis, which is the true reason we are here. It doesn’t take long upon arrival to see one of the biggest issues, plastic pollution, which is affecting the local community and its marine life. Through our Legacy Programmes, we are supporting the local community to make change, and I can’t wait to see it for myself and help where I can.”

Nico Rosberg, RXR founder, added: “The team did an incredible job in Saudi Arabia to get the win and we’re very proud to be the first X Prix winners in Extreme E history, but we know we need to stay focused if we are to remain at the front. The series is already so competitive, but this team loves a challenge, and we can’t wait to go racing again in Senegal.”

In Senegal, Extreme E is also supporting two projects. For the first, the championship has teamed up with local NGO, Oceanium, which Extreme E identified in partnership with to.org, to plant one million mangrove trees in Senegal across 60 hectares with the aim of reforesting mangroves, providing education to local populations and improving social cohesion.

For the second, the series is supporting the EcoZone Project, a living lab that addresses the Lac Rose community’s primary needs while preserving the environment through experiential learning, regenerative agriculture and a circular economy. As part of this, the EcoBrique Challenge was launched which tasked the community to create bricks for construction from plastic waste.

The Finals will be shown in more than 180 countries by 75 broadcasters including Fox Sports in the USA, ITV, Sky Sports, BBC and BT Sport in the UK,  Teledeporte in Spain, Proseiben MAXX in Germany, Mediaset in Italy as well as Eurosport across most European Markets and SuperSport in Africa.

A full list of broadcasters outlining what will be aired and when it’s available can be found here.