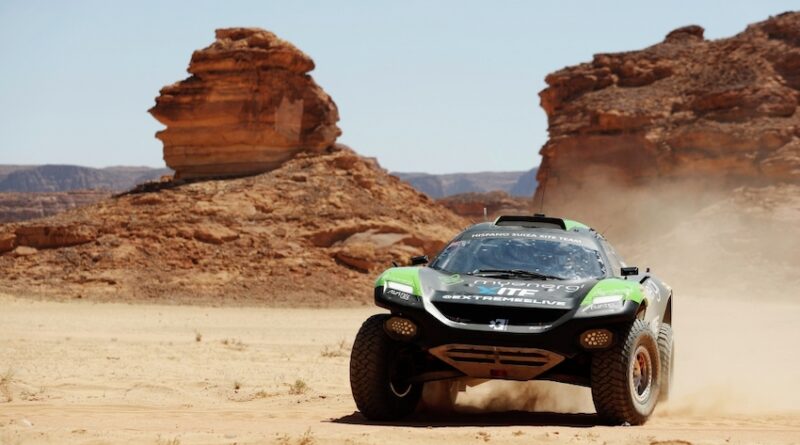 In the latest episode of the Everything EV podcast, host Charlie Atkinson was joined by two guests from within Extreme E to discuss the revolutionary electric-racing series.

In this special episode, Ali Russell, chief marketing officer for Extreme E and Oliver Bennett, one of the drivers from the Hisapno Suiza Xite Energy Racing team, spoke about the new series and looked ahead to the next X-Prix weekend in Senegal.

Having worked for some of the biggest sporting teams and organisations within the UK, Ali Russell has been involved with Extreme E from its earliest stages and is responsible for the global image of the electric-racing series.

Speaking on the podcast, Russell outlined the journey of Extreme E and why it is being regarded as one of the most exciting motorsports in the world.

“Extreme E is so much more than a sport,” he said. “It’s a sport for purpose and our purpose is tackling climate change. We’re looking to tackle that by building the general awareness of climate change in racing in the localities that are devastated by climate change, so burnt areas of the Amazon, melted parts of ice caps, areas that have been eroded by sea-level rise, desertification, and glacier melts.

“Each of the races has a location which is suffering and what we try to do is to use the drivers, the team principals, and the mechanics to tell the stories of what’s going on in these communities but to tell it through sport because sport is highly engaging and highly sticky. That enables us to reach an audience that isn’t being reached at the moment. If you don’t watch the news and you don’t watch documentaries, you don’t get a level of understanding of what the planet is going through.”

At the very centre of Extreme E are the fully electric SUV’s, named Odyssey 21. The cars have been developed to cope with some of the harshest, most remote locations on earth, all whilst racing at break-neck speeds.

Talking about the cars, Russell said: “I used to put Formula 1 drivers into a Formula E car and they used to get out and they were pretty much underwhelmed; they said it was more akin to F3 or F2.

“What’s amazing with this series is that I’ve put people like Sebastian Loeb and Carlos Sainz in the car and they get out and they go “wow!” The reason they go wow is because we are on the third generation of electrification now and the performance of these cars is incredible; it’s actually better than the equivalent for the combustion engine. The torque is incredible, the speed we go is 0-60 in just over four seconds and the top speed is around 125mph, it’s 550hp so it’s a beast of a car. We have a chassis that is lighter and stronger than steel, continental tires help us through all terrains. The battery is also an incredible bit of engineering.

“At the moment, people think of either a Leaf or a Prius and some of the less exciting cars which happen to be electric, and what we want to do is challenge the perception. That really helps with us engage with people in their daily life.”

In the second half of the podcast, Oliver Bennett, one half of the Hispano Suiza Xite Energy Racing team, spoke about his role in the series and how different he has found it having moved over from RallyCross.

“It’s such a difference to what I’m used to,” Bennett said when asked about the differences between the two motorsports. “RallyCross is quite small, combustion-engine cars, very powerful with 600 horsepower and it’s a mix of tarmac and dirt but not extreme circuits as they’re based on race circuits. When you come to Extreme E and it’s these huge, great trucks which are taller than me and you need a ladder to get in thing! Obviously, there’s a battery inside so the car makes no noise and it’s just as fast as my small RallyCross car, which, to see it, is quite unbelievable; they look like these massive Mars-rover trucks from another planet.

“They’re pretty interesting cars themselves and then you’ve got the circuit which is based in the middle of nowhere. I’ve only seen one so far which was in Saudi and it was breathtaking. There were these huge valleys in-between rocks with dust bowls underneath with big dunes and massive drops. The first event was eye-opening. We’re off to Senegal next for the second event and I’m sure that’s going to be just as crazy on the beach there.”

For the inaugural season, Extreme E will travel across the world with Saudi Arabia, Senegal, Iceland, Brazil and Argentina making up the full race calendar.

Looking ahead to the rest of the season, Bennett is excited to tackle the various climates but insists he doesn’t know what to expect.

He said: “If I told you what I thought Saudi was going to be like, it was nothing like I thought. I was expecting big dunes and desert and things when really there were these huge canyons and valleys. It’s really hard to think what they’re going to be like but, for me, Iceland sounds the coolest; it’s ice, cold and a different climate I’ve never raced in before. Sand and mud and things like that I’ve driven on before, but Iceland I think is going to be incredible. I’m excited to see all of them.

“I was surprised to see just how extreme these tracks were. I knew it was in the name, but I thought it was just going to look good on TV, but to see the drops and the terrain, it is pretty crazy and they’re all going to have their little quirks and I’m interested to see them all.”