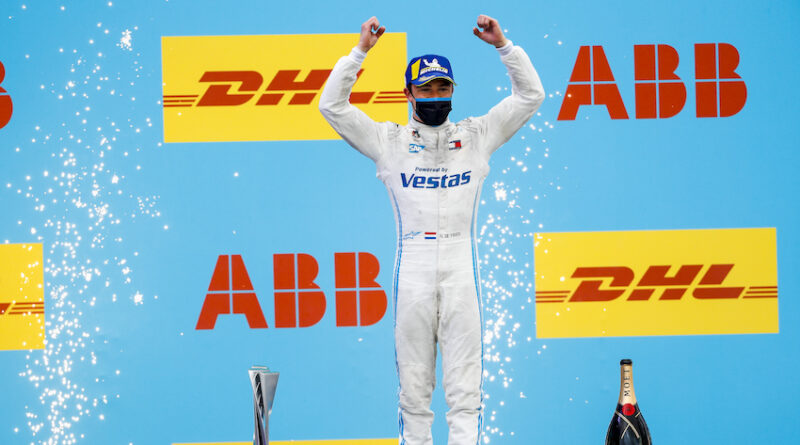 Off the back of his victory in Round 6 of the Valencia E-Prix, Mercedes-EQ’s Nyck de Vries spoke exclusively to EV Powered about a crazy weekend in Spain and his thoughts heading into Monaco.

In an incident packed race on the Circuit Ricardo Tormo which saw only a handful of drivers finish, de Vries navigated himself to his second win of the season to put him at the top of the drivers’ standings heading into Round 7.

“It was a very unexpected end to the race,” de Vries said, reflecting on his win. “I was very pleased with how we executed the race right up to the end. We would have taken P2 considering everything, we were happy with the strong podium finish and a good result. But somehow, we found ourselves winning in the end.”

The energy management crisis at the end of Round 5 had drawn some criticism from fans and de Vries spoke after the race about how certain parts of the Championship could be reconsidered. However, he believes the FIA is not to blame for what happened in Valencia.

“It’s a little bit unfair to blame the FIA for what happened,” he said. “Of course, you can say the organisation maybe should have reconsidered the last energy reduction, however, the rule is if you spend a minute behind the Safety Car the energy will be reduced by 1kW. The only downside, which not everyone predicted, was that when you remove 1kW of energy in the middle or beginning of the race, you can stretch that out over the remaining laps. But when there are only 2 laps to go, proportionately, that kW has a much greater influence.

“We were really good at saving throughout the race to be able challenge and fight Antonio (Felix da Costa) at the end. I think people were too focused on the rain and weren’t conscious of saving energy; it was an energy sensitive track so when you put all of that together, that’s what happens. I think it’s really unfair to blame the FIA for it because everyone is aware of the regulations. Everyone knows about it.”

Valencia had previously been a testing track for the series but as a result of the pandemic, it was added to the race calendar this year. While he understands the position the FIA was in, de Vries made it clear that Formula E belongs on the streets.

He said: “I’m very open and clear about the fact that we shouldn’t be racing on normal tracks in the first place. I appreciate and understand the difficulties the organisation is facing at the moment with the pandemic, so we need to support the series in that respect.

“However, going forward, I think this should not become part of the calendar. This is not what the Championship is designed for.”

For Round 7 of the ABB FIA Formula E World Championship, the teams head to Monaco where they will be faced with a new track layout which now features the famous Monaco tunnel.

While he is excited about the prospect of racing on a street circuit again following the drama from Spain, de Vries believes Monaco could throw up some similar challenges.

He said: “Monaco is a very big Formula E track and the sensitivity is very near Valencia. From a Formula E perspective, and from an energy management and racing perspective, I think it actually comes quite close to Valencia.”

Commenting on the new track layout, de Vries said: “I’m looking forward to going to Monaco; I always love racing there. Turn 1 looks to be very, very quick and the chicane after the tunnel is a lot tighter. I think the previous track was too short; it was too small so there was no management involved at all.

The FIA also released the venues for the rest of the season 7 calendar, which includes a new circuit in Puebla, Mexico, as well as visits to New York, London and Berlin.

“I’ve not raced at New York or London before so I am looking forward to that,” de Vries said. “I always enjoy going to new places. They are places that I haven’t been too yet and I think the organisation has done really well to come up with such a good calendar considering everything. I will miss places like Santiago from the calendar; we went there last year, and I really liked the city, the place and the fans were very enthusiastic. It was a real surreal street track.”

Before he can get too excited about the new venues, however, de Vries must prepare for Monaco where he will look to defend his position at the top of the drivers’ standings. Despite closing in on the halfway stage of the season, de Vries believes it is still too early to be thinking about his first Formula E Championship.

He said: “I’ve realised in the first six races that you just have to learn to accept that unpredictability is a big part of this Championship; anything can happen. Honestly, I’m just taking it day by day and that’s the only way you can look at it. Yes, I’m always going to strive for the Championship, but the focus is just trying to prepare ourselves for the next event and trying to maximise our performance and result on the day.”