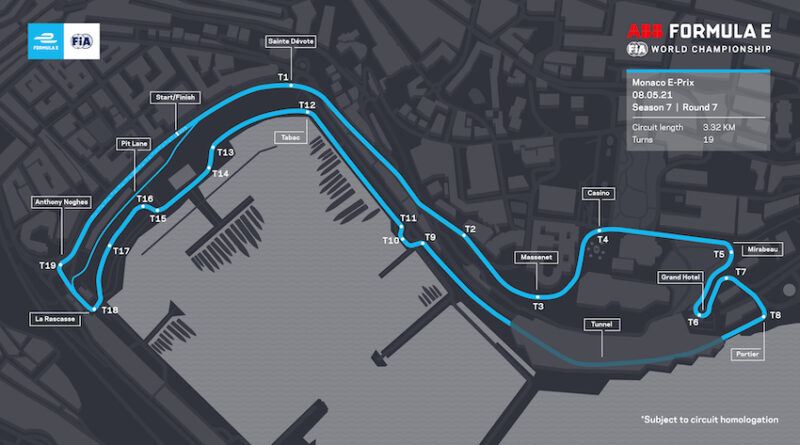 Formula E, the FIA and the Automobile Club de Monaco (ACM) have revealed a new track layout for the 2021 Monaco E-Prix in May.

The 19-turn, 3.32km circuit will see the drivers go up the hill after the first turn at Sainte Devote and complete a new section, including corners around Casino Square, Mirabeau, the Grand Hotel Hairpin and Portier.

Drivers will also make their way through the famous Monaco tunnel for the first time in ABB FIA Formula E World Championship history.

FIA president, Jean Todt, said: “I’m glad to see the ABB FIA Formula E World Championship back in the Principality. It is in the series’ DNA to compete on streets circuits and Monaco is one of the most iconic tracks in the world. This discipline has its own identity, that’s why, together with Formula E and the ACM, we’ve designed a bespoke layout which suits its particularities.”

This year’s edition will be the fourth running of the Formula E event in Monaco, with the event continuing to be included on the calendar on a biennial basis.

Former champions Sebastien Buemi (Nissan e.dams) and Jean-Eric Vergne (DS TECHEETAH) have both collected the winner’s trophy from HSH Prince Albert II of Monaco, with Buemi being the most successful driver around the streets of Monaco in Formula E, with two victories.

Alberto Longo, co-founder and chief championship officer of Formula E, said: “To see Formula E race around the longer version of the most historic racing circuit in the world will mark another great milestone for the ABB FIA Formula E World Championship.

“In many ways, this circuit is made for Formula E – it’s a fast and narrow street circuit which will see plenty of opportunities for overtaking and will really test driver’s energy management with sharp inclines and high-speed sections.

“The FIA and the ACM are allowing us to race around corners steeped in motorsport tradition and we are honoured that Formula E will be creating its own history.”