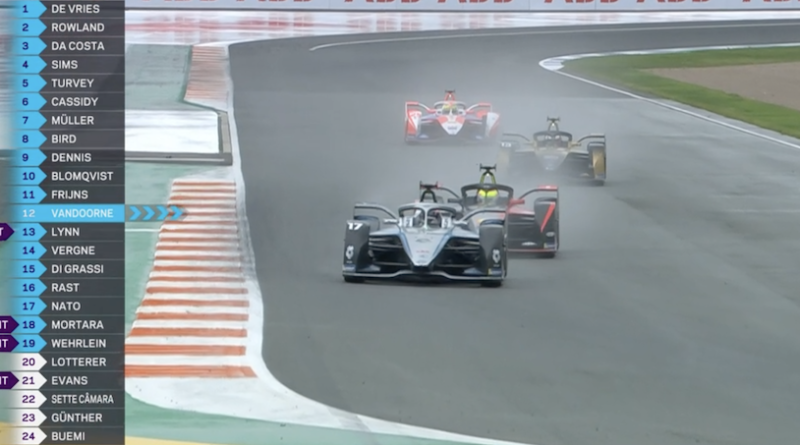 Energy management was at the forefront of everyone’s mind heading into the weekend, and with one lap remaining, the majority of drivers ran out of energy allowing Dragon / Penske Autosport’s Nico Mueller and Mercedes’ Stoffel Vandoorne to grab a podium, who started the race in 24th.

The race was littered with incidents, with tight corners and some of the wettest conditions seen in Formula E forcing the Safety Car out five times.

The win lifts Nyck De Vries to the top of the drivers table as Formula E prepares for what is set to be another dramatic day of racing in Valencia tomorrow.

A chaotic Formula E weekend began in qualifying as Stoffel Vandoorne, who had qualified in pole, had his time disqualified for a tyre irregularity which meant DS TECHEETAH’s Antonio Felix Da Costa started the race at the front.

The track was wet throughout and meant the race started behind the Safety Car, just as it did in Rome.

It was non-stop action once the Safety Car pulled in, however, as the nature of the Circuit Ricardo Tormo and its mixture of wide and narrow corners made for lots of overtaking and collisions.

Turns 11 and 12, a tight, snaking bend leading into the straight, was at the heart of the action throughout the race and it claimed its first victim when Tag Heuer Porsche’s Andre Lotterer harpooned Nissan E.Dam’s Sebastian Buemi and caused a great deal of congestion.

Buemi’s race was over, but the excitement had only just begun.

As the rain continued to pour, De Vries carved his way through the grid and found his way into second and began his tussle with Da Costa who was leading with style.

Nissan’s Oliver Rowland was also making his way up the field, sniping his way into fourth will a brilliant overtake on turn 11, coming from wide to take the inside line before speeding away onto the straight.

Vandoorne had made good progress from the back, jinking his way into 12th and within touching distance of the points.

BMW’s Max Guenther was next to fall foul to the conditions as he lost his back-end heading into turn 2 and was soon spinning off into the gravel.

Mahindra Racing had managed to tame the track and the conditions, with Alexander Sims forcing himself into 4th having started back in 11th and Lynn also enjoying himself in third.

Jaguar Racing’s Sam Bird had been quietly working his way up, ascending into 13th having started all the way back in 21st.

The next big incident involved Vandoorne who’s steady progress had been undone by a coming together with Nico Mueller. At the same time, Dragon’s Sergio Sette Camara and Mitch Evans had their own altercation, and both of their races came to a premature end.

Once again, the Safety Car was sent out and the battle between De Vries and Da Costa was heating up.

It was genius driving from Da Costa who had dominated the race up to that point.

With plenty of overtaking opportunities available due to the nature of the course, the pack chopped and changed order before a fifth Safety Car was triggered after Lotterer went slip’n’sliding into the gravel.

The race was building to an epic conclusion as it became clear that energy was going to become an issue for the majority of the drivers.

De Vries, however, had managed his energy expertly and as Da Costa was forced to slip back, he flew past and surged to victory.

With drivers’ energy dropping to 0%, it became a mission to figure out who would finish where and who would have enough energy to make it past the finish line.

After a quick calculation, Nico Muller, who was technically in 11th place, finished second and Stoffel Vandoorne stepped up onto the podium in third having been right the way back in the grid.

The result puts Nyck De Vries into first in the drivers table, ahead of Stoffel Vandoorne and Sam Bird. A good day for Mercedes means they now sit top of the teams’ standings.

The drivers and teams will have another go at the Circuit Ricardo Tormo tomorrow for Round 6 of the ABB FIA Formula E World Championship.