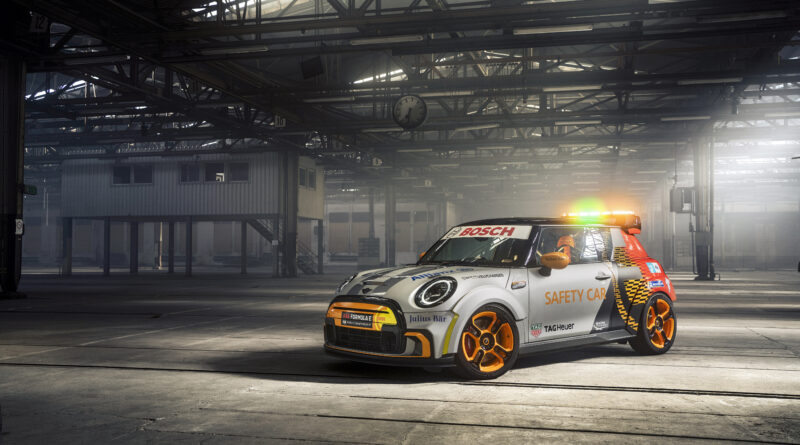 The influence of Mini’s JCW GP performance flagship is clear: prominent air scoops at the side, a sizeable rear wing and an aerodynamic-enhancing front splitter point to its performance focus, while the road car’s 18in sports alloy wheels have been carried over and finished in a unique two-tone livery.

As such, it connects the brand’s electrified future with the rich racing history of John Cooper Works. The car was created out of the new MINI Electric as part of an unprecedented collaboration between MINI Design, BMW Motorsport, the FIA and the Formula E.

This extreme version of the Mini Electric has been developed as the Safety Car in the Formula E, so is clearly not intended for use on public roads. But it does reveal one of the directions we could take with the electrification of the JCW brand. For me, the message is clear: electrification and John Cooper Works are a good fit.”

The Mini Electric Pacesetter will come into use in Rome on 10 April 2021 at the second event (Race 3) of Formula E’s 2021 season. At the wheel will be official Formula E Safety Car driver Bruno Correia, as BMW i Andretti Motorsport drivers Maximilian Guenther (GER) and Jake Dennis (GBR) battle it out for victory in their BMW iFE.21 racers.

“Agility, performance and a cool looking car. The Mini Electric Pacesetter Safety Car of FIA Formula E World Championship has got it all. Very fun to drive, it feels like karting”, said Correia.