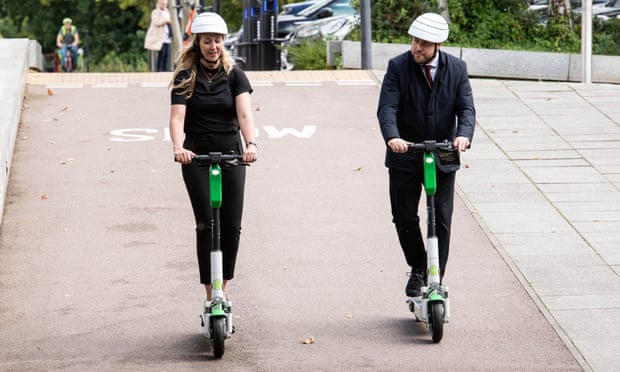 The UK’s journey to legally embrace e-scooters has taken another zip forward with the start of a full-scale ride-sharing service in Milton Keynes, and further schemes announced for Northampton, Norwich and Cambridge.

More cities around the country are expected to follow suit with year-long trials, as potential operators unveiled new technology in the race to tap into Britain’s new micromobility market.

Lime, which operates the e-bike sharing scheme in Milton Keynes, will from Wednesday provide up to 500 e-scooters on the same app, and claims it will be the first UK service on a par with other cities worldwide.

The government amended the law in summer, with the first pilot scheme starting in Teesside last month – to be extended this week – after measures to address initial misuse that included two teenage riders stopped by police on the A19 dual carriageway.

Alan Clarke, the director of UK policy at Lime, said the scale would allow people to have confidence in scooters as a genuine transport mode when planning their journey: “In some of the smaller schemes, it’s a novelty thing and that’s what we want to avoid.”

Apart from designated local trials, e-scooters remain illegal on public streets, despite their apparent widespread use. Britain has tighter laws than most countries on scooters, which it classes as motorised vehicles, and only those hired on a rental scheme can be used on roads in the trial zones.

Coronavirus has accelerated demand for reform in the UK, but also deterred people from using shared schemes. In the early stages of lockdown, Lime and Bird closed down scooter operations in cities around Europe and North America.

Lime, and the Swedish firm Voi, which will run the Northampton and Cambridge schemes starting in September, say every scooter will be disinfected on a daily basis, while Voi is covering its handlebars with antiviral copper tape.

Firms vaunt the technology’s green credentials and appear to be going the extra mile to cut emissions, as well as addressing concerns over the lifespan of scooters. The European startups Voi and Tier have pledged to use electric cargo bikes rather than vans in the daily servicing of the networks – redistributing scooters, charging batteries, doing repairs and disinfecting.

Tier, a German firm yet to launch operations in the UK, but bidding to land at least one of the bigger city schemes, hopes to go further. It has introduced swappable batteries in around 90% of its fleets in Europe, reducing the need to transport entire scooters for charging. It says it will not employ gig economy workers – but also hopes to incentivise users to help themselves, via charging hubs that can be placed in stores and public buildings. Users can earn a free ride by taking out the depleted battery and swapping it for a recharged one.

This system is to be the first, and imminently launched in Tampere, Finland, but could it work here? In a London launch on Tuesday, Tier’s chief executive and co-founder, Lawrence Leuschner, unveiled a further pièce de résistance – a bespoke foldable helmet, stored in a box on the scooter frame, and surely destined for pillaging in the UK. Leuschner admits he is aware of the fate of Mobike, the Chinese bikeshare that retreated from Manchester after pulling battered bikes from canals.

But, he says: “It’s important that we drive innovation and educate people – and if we do it in a sustainable and responsible way, rather than flooding the market with lots of different vehicles in lots of colours all over the pavements, I hope people will treat them responsibly.” He adds there is always an element of trouble, “not just in the UK”.

Geofencing has improved to the point where firms say they can pinpoint the e-scooters’ location within a couple of metres, allowing them to know whether they are returned to specified bays where cities demand. Lime’s scheme will allow users to park at night almost anywhere within Milton Keynes, but they must take a picture to show it has been left appropriately, without blocking pavements.

At £1 to unlock the scooter and 20p per minute, a prolonged ride quickly goes beyond bus fare territory, but Lime is hoping to entice riders with initial discounts and free rides for key workers. Clarke says the e-bike has already proved financially sustainable and scooters could be a bigger hit: “We believe there is going to be really high demand … We’re in for the long haul.”

Lime and others hope to have learned from teething problems abroad – as well as running potentially more highly regulated services in the UK. “How you engage with the city, police and community – disability organisations, residents and environmental groups – is really important.”

London remains a prize target – although its authorities, scarred by the experience with Uber, are perhaps more reluctant to embrace firms promising technology solutions at the possible expense of existing systems. Transport for Londonsays it is open to “safe and sustainable” solutions but wants a coordinated trial across the capital, designed with all its communities and infrastructure in mind, adding its “viability and any geographical scope is yet to be determined”.