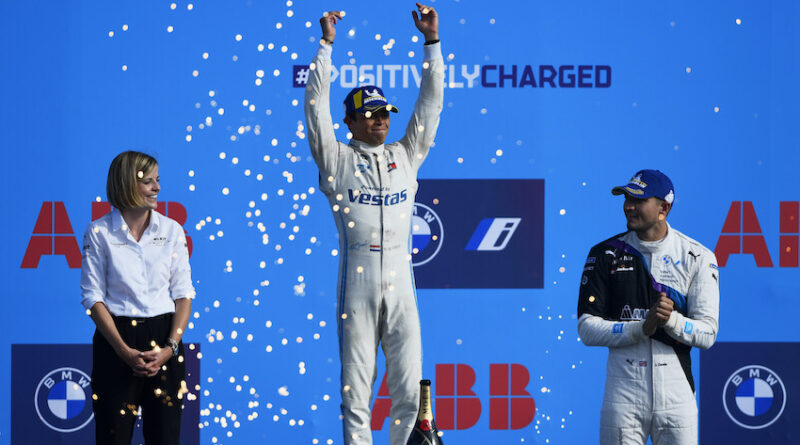 The Dutchman came out on top of a frantic final day where 13 drivers had the potential to clinch the title but ultimately, De Vries’ eighth-place finish was enough for him to claim his first Formula E championship.

It was a day of firsts as ROKiT Venturi Racing’s Norman Nato sealed his maiden Formula E victory, finishing ahead of Nissan E.Dams Oliver Rowland, his last race for the team, and Mercedes EQ’s Stoffel Vandoorne.

The results also secured the Teams’ World Championship for Mercedes EQ, pipping Jaguar Racing and DS Techeetah to the post.

There was a lot riding on the final round of racing with the majority of the grid all still with a chance of taking home the top prize.

One of the favourites to win the Championship was Jaguar’s Mitch Evans, who had put himself into a fantastic position having qualified in third position.

However, the Kiwi’s race never began, with his car failing to start after launch and leaving him stranded in his starting positions as the lights went green. As most of the drivers’ were able to navigate around the Jaguar, fellow championship rival Edoardo Mortara failed to spot Evans through the crowd of cars and went smashing into the back of him. It was a horrible collision but thankfully both drivers were unhurt.

A lengthy delay followed, with the red flag being waved as the stewards cleared the wreckage on the start line.

The action eventually got back underway but as soon as it started, another full course yellow was called as BMW’s Jake Dennis, who now had a fantastic opportunity to stake his claim for the Championship, locked up on the restart and went skidding into the wall and off at Turn 1.

Dennis was visibly furious with what had happened, knowing full well that he had the perfect chance to clinch the title in his rookie season.

Following the two incidents, Mercedes’ Vandoorne found himself leading the pack and his teammate De Vries was also just outside the podium places and in a decent point-scoring position.

ROKiT Venturi’s Nato made the most of his first Attack Mode however and managed to burst past Vandoorne to take the lead after ten laps of racing.

It was a lesson in when, and how, to deploy the Attack Mode as Nato timed his perfectly to take the lead whereas Vandoorne’s late activation saw him drop all the way down into sixth place.

Nissan’s Rowland, who had qualified in second place, had still managed to retain his starting position but was struggling to keep up with Nato, who was setting a great race pace and seemed to be peeling further and further ahead.

Positions chopped and changed as the race finally settled down after a hectic start, and highlights were few and far between until Porsche’s Lotterer, Mahindra’s Sims and De Vries ran side by side coming out of Turn 2, with the shakeout causing contact between De Vries and Vandoorne, very nearly bringing an end to both of their races. An incident such as that would very much have been in the style of this race, but thankfully for Mercedes’ sake, the duo just about managed to keep it together and they remained on course to seal both Championships.

Having built up a sizeable lead, the gap was closed with the return of the safety car, this time being drawn out after DS Techeetah’s Antonio Felix da Costa was narrowed into the wall by Lucas di Grassi at the hairpin, bringing an early end to the reigning champion’s weekend and season.

Although the gap narrowed, Nato had the pace to keep Rowland at bay and crossed the line comfortably ahead of the Nissan driver and his teammate Vandoorne, who had recovered from his mid-race slump to climb back into the podium positions.

Nato celebrated his very first Formula E victory but attention quickly turned to the new World Champion Nyck De Vries, who finished top of the pile ahead of second-place Edoardo Mortara of ROKiT Venturi Racing and Jake Dennis of BMW i Andretti Motorsport.

It was a race that perfectly encapsulated all the drama and excitement that Formula E has become well known for. The wait for Season 8 and Gen3 of Formula E begins now.