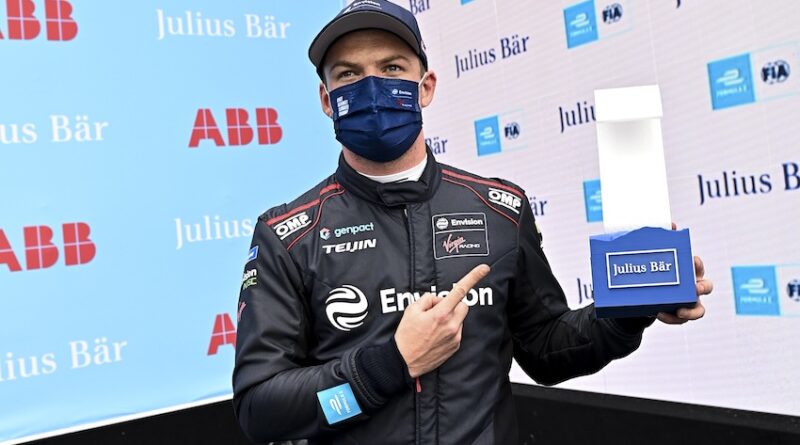 Off the back of his maiden pole position in the Rome E-Prix, Envision Virgin Racing’s Nick Cassidy talks to EV Powered about his fast start to Formula E.

New Zealander Cassidy well and truly announced himself on the Formula E stage in Round 3 of the Rome E-Prix when he clinched his first-ever pole position in the series. While results didn’t go way over the weekend (finishing 15th in Round 3 and failing to finish in Round 4), Cassidy is happy with his start to life in Formula E.

“I’m really happy,” Cassidy said. “I think I’ve been stronger than even I could have expected.

“I’ve seen many top drivers come into this category and never really get it or take a long time to get it. I feel that, even from the first race, I’ve been there with only three days of testing and I’m proud of that. That hasn’t translated into points, but I don’t think that’s a huge issue. I’d rather have lots of promise and good race speed than to be lucky and pick up a few points here and there.”

There is certainly promise from the Kiwi, having shown good speed in qualifying throughout the season. Fellow New Zealander Mitch Evans of Jaguar Racing has also backed Cassidy to go on and achieve great things in the series, with the two having grown up together.

Speaking to EV Powered, Evans said: “Nick and I are good pals, I’ve known him since I was six years old and we’ve grown up together. It’s really exciting to have him in the series and he’s had a strong start as a rookie.

“He’ll do great things in the series and I’m definitely expecting that; we’ve already seen glimpses of it. He’s shown enough of himself already for people to know that he can fight for the front of Formula E.”

“That’s nice of him to say that,” Cassidy replied. “It’s cool to be racing with him but at the same time he’s a competitor. I think over the last few years he’s shown that he’s one of the top guys here and he performs extremely well. Even though he’s a friend, when you come into the Championship, he’s someone you look at and think ‘what does he do well?’ I try and analyse what his strengths are, and I try to learn from that, just as any competitor. When you’re new to a series, it’s about looking at these guys and figuring out what they do well.”

Being able to learn and develop is Cassidy’s main aim for the season, and he insists he isn’t focusing on points or positions.

He said: “I just want to keep learning and take on as much information as I can. I want to bring as much as I can to the team for us to move forward. I’m not really a guy who focuses on certain results or positions, because as we’ve seen with Formula E, one little thing can make or break a day, so I’m more about things that are in my control and in terms of results, whatever will be will be.”

Someone who Cassidy has been able to learn from is teammate Robin Frijns, a veteran of the season who currently sits third in the drivers standing.

Cassidy praised Frijns’ influence and claims he is relishing the opportunity to learn from one of the biggest names in the sport.

“We get on super well,” Cassidy said. “It’s a funny one, because what I’ve learned is that there a certain things which I don’t necessarily know about which he takes for granted because of his experience.

“He’s been involved in a few more seasons than I have and it shows in some areas. He sometimes talks about things which I have no idea about, but they are things that come very natural to him. That’s up to me, to take that comment and learn about it to make sure it comes naturally to me in the future. That’s what the first couple of months with the team was all about and I’m still in the process of trying to make things become more automatic. I think when we get to that stage where things become faster for me then the weekends will be more complete.”

That weekend could well be Valencia, which is set to take place on the 24th and 25th April on the Circuit Ricardo Tormo. Previously a testing track, the layout has been tweaked slightly for the race calendar and now features more corners and is a world away from the streets of Rome.

The track has been a hot topic, with concerns about energy management at the forefront of a lot of drivers’ minds, including Cassidy’s.

“The circuit looks quite fun,” Cassidy said. “The changes from the test are in the right direction with more, tighter corners. It probably doesn’t solve the energy management issue where there is going to be an extreme amount of saving. The race is going to be very difficult as a rookie because the more amount of saving that is needed, the more foreign it is to me. I’m expecting a tough race from that point of view but I’m expecting these challenges in Formula E.”