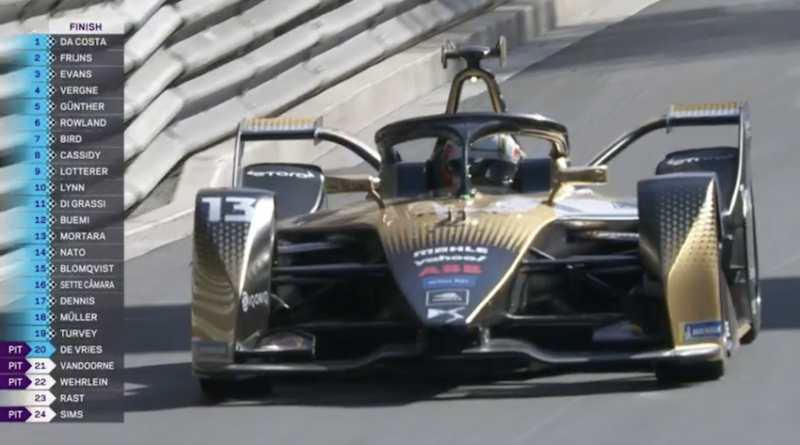 Having started the race in pole, Da Costa was drawn into a tense battle with Jaguar Racing’s Mitch Evans who was leading up until the final few corners.

However, coming out of the famous Monaco tunnel, Da Costa seized his opportunity and nipped in ahead of Evans, who had to eventually settle for third after almost running out of energy and allowing Envision Virgin Racing’s Robin Frijns to take second.

Monaco is the highlight for many racing fans and it was clear to see why right from the early exchanges, as a series of tight opening corners spilled into the hairpin, resulting in a coming together which ultimately brought Mahindra Racing’s Alex Sims’ race to a premature end.

Thankfully, the race managed to avoid too many incidents and instead the headlines were dedicated to epic battles and genius moments of driving.

Da Costa had managed to escape the early incidents unscathed, as did Robin Frijns who was right up behind the leader and was looking for any chance to overtake.

He didn’t have to wait too long for an opportunity, however, as he managed to out-brake Da Costa on the approach to the hill and sped away to build a reasonable lead.

The drivers’ were experiencing the full Grand Prix circuit in Monaco for the first time this year, but although the track layout was longer this year, space on the streets was typically tight and a number of tussles were beginning to appear.

BMW i Andretti’s Max Gunther was the first of the chasing pack to take the plunge and trigger his attack mode and was able to nip into third place following a push-and-shove between Evans and Jean-Eric Vergne on the exit of the tunnel. Da Costa spotted his gap in the fracas to snipe his way back into the top spot, and it wouldn’t be the last time both Evans and Da Costa jostled for positions on that turning.

Positions chopped and changed towards the front of the pack as Frijns made the most of his attack mode to regain top spot and was able to build a generous gap between himself and the ensuing Da Costa.

Elsewhere, Jaguar’s Sam Bird, who started in 16th, had raced well and found himself in ninth and Nick Cassidy had sneaked his way into sixth. Audi’s Rene Rast was also scything his way up the grid and had positioned himself in seventh.

Attack modes were proving pivotal in this race and Jean-Eric Vergne had momentarily found his way into second place. With a small gap and an opportunity to trigger his second attack mode, Vergne missed the gates and slipped back into fourth place with no extra power to show for it. A big mistake from the former Monaco E-Prix winner.

Frijns’ gap had slowly been whittled away by Da Costa who was kissing the Dutchman’s tail through a series of tight corners. Evans was also lurking just behind in third place after activating his second attack mode of the race.

The front three of Frijns, Da Costa and Evans were all engaged in a nervy tussle, with each driver having to manage the tricky, winding circuit of Monaco while also trying to defend and attack.

The use of a FanBoost allowed Da Costa to burn past Frijns in the tunnel and Evans, who made the gap between third and second even tighter, was eagerly looking for any chance to push his way past Frijns.

With two minutes remaining on his Attack Mode, Evans eventually worked his way past Frijns who was desperately scrambling to hold onto second place but couldn’t do enough as the two found their way onto the straight.

With his sights set on first, Evans precisely executed an inch-perfect overtake of Da Costa up the Beau Rivage, squeezing his way between the barriers and Da Costa in a move that looked almost impossible. It was a breath-taking piece of driving and it was the moment that started an enthralling fight between Evans and Da Costa.

The pace was forced to slow as a result of a Safety Car, which was called out following Audi’s Rene Rast coming into contact with the wall following a scuffle with Cassidy. His race was over but once the Safety Car finally pulled in, the action well and truly began.

On the final lap, Da Costa was a man possessed as he looked to take the top prize in Monaco and Evans was becoming increasingly conscious of his energy which was slowly ticking down.

It looked as if Evans was going to be able to hold on as he approached the tunnel but on exit, Da Costa muscled his way through and came out in front of the Jaguar. Evans didn’t have long to think about losing first place as his focus quickly shifted to defending second from the onrushing Frijns.

As the drivers’ rounded the final corner, Da Costa crossed the line in first and Evans had no choice but to lift his foot off the throttle to avoid running out of energy and Frijns pipped into second just in the nick of time.

It was a thrilling conclusion to a race that was always going to deliver. A good day of racing was complete for DS Techeetah as Jean-Eric Vergne finished fourth ahead of Gunther, Rowland, Bird, Cassidy, Lotterer and Lynn.

The result lifts Robin Frijns to the top of the drivers’ standings, with Evans back up the third place behind Nyck de Vries. Antonio Felix Da Costa is now right back in the mix in fourth place in the Championship.

Mercedes-EQ managed to hold on top first place in the teams’ standings despite De Vries and Vandoorne both failing to score points. Jaguar Racing is now just two points off top spot but is closely followed by DS Techeetah in third.

The next Formula E race weekend takes place in a new venue, as the teams and drivers jet off to Puebla, Mexico, for Rounds 8 and 9 on 19th and 20th June.