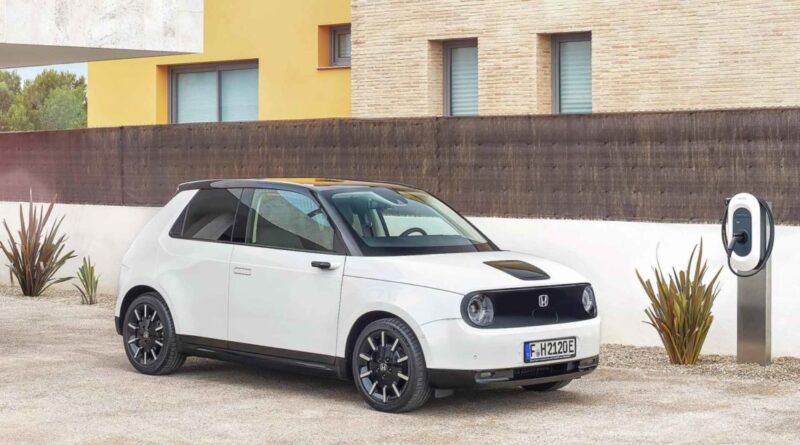 The Honda e is an all-electric concept only Honda could build. Taking a different approach to every other car company has created a model that has desirability by the bucketload, even amongst those it patently isn’t designed for or suited to.

It is small, and decidedly premium-priced (from £26,160, or £28,660 for the Advance grade nine in 10 are currently buying), and the range is half that of the similar-cost and significantly larger Kia e-Niro. But for the trend-setting urbanites it’s aimed for, this is immaterial. They want an electric car that feels a million dollars and delivers an experience that’s unique.

The Honda e is that car.

For those who might not find it suitable, Honda has an electrified Jazz coming soon that might do the trick, for thousands less. The Honda e will get them through the doors, though. And, as we discovered, if they do accept a test drive, there may be some interesting head-versus-heart decisions to be made.

Seeing the Honda e out on the road, with normal cars around it, does not diminish its concept car appearance. It accentuates it. The vividly clean and precisely-cut lines are clarity in a car world of compromise. It is vivid, self-assured, and instantly likeable. People will fall in love with it, like they did with the original Mini.

It is small, shorter than a Ford Fiesta, and the tiny 171-litre boot (less than half the size of a Honda Jazz) just about takes carry-on suitcases, but little more. Adults can get into the rear without getting stuck, but it’s undeniably tight. For those in the front, though, it feels fine, with lots of seat adjustment, plenty of headroom and little sense you’re obviously sat in something so compact. 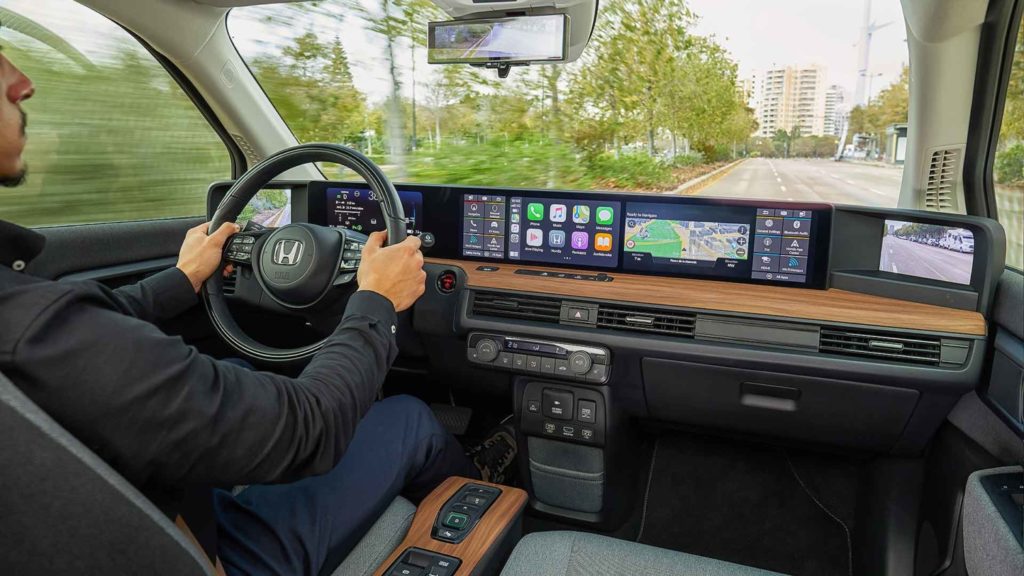 The dashboard is breathtaking. Screens span the full width, just like in the concept. At the outer edges are two high-resolution rear-view cameras, which take the place of door mirrors. At first, it’s hard to stop staring at the video feeds of what’s going on behind you.

Ahead of the driver is a colourful instrument display, packed with information, which will take a bit of getting used to. The stars of the show are the dual 12.3-inch HD displays alongside. So central are these to the Honda e experience, we’re given a tutorial before we set off for the drive. 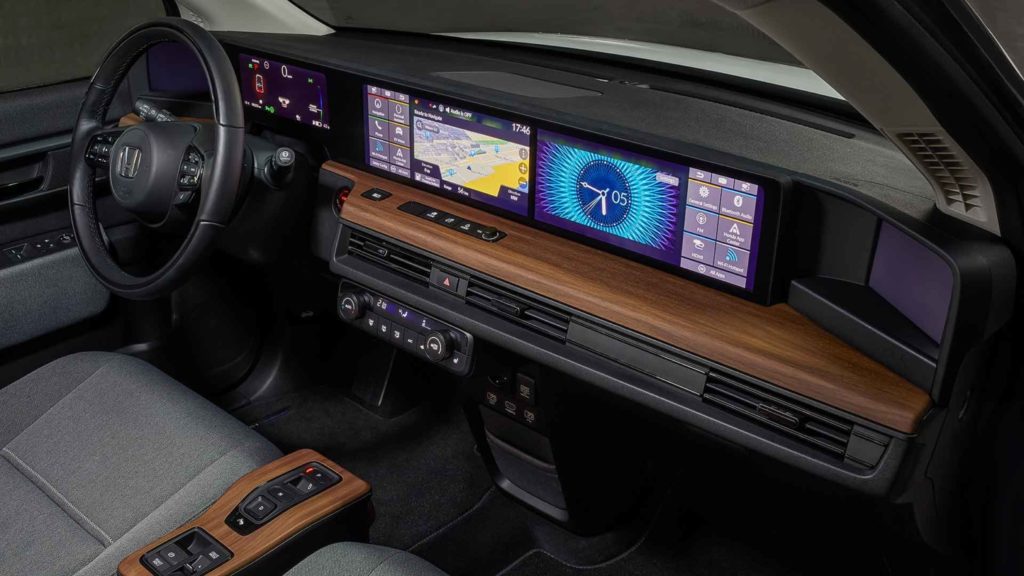 They’re touchscreen, with virtual ‘hard’ shortcut keys on the outer edges of each. They work independently, so the driver can use the sat nav and the passenger can play with something else. Apple CarPlay and Android Auto give smartphone mirroring. A clever trick: the driver can open a screen then ‘swipe’ it over to the passenger side (or swap the displays at the touch of a button).

There are some Easter eggs, too. An aquarium, in which you can choose the number and type of fish. Or you can have various full-width wallpapers instead. The Honda virtual assistant (complete with cute bouncing ‘face’ icon) understands natural language. Honda Parking Pilot is an auto-park system that scans bays and shows a live video feed on the screen: if it can manage to auto-drive into one, the space lights up green – simply tap the space and the e takes over to park it up for you.

More generally, the interior has a lovely ambience, purposefully lounge-like with melange-style seat upholstery more like sofas than cars. The wood-effect panel on the dash is convincing (you can actually feel the grain), the brown seatbelts are neat and it all feels high-quality and premium enough to justify the price tag. 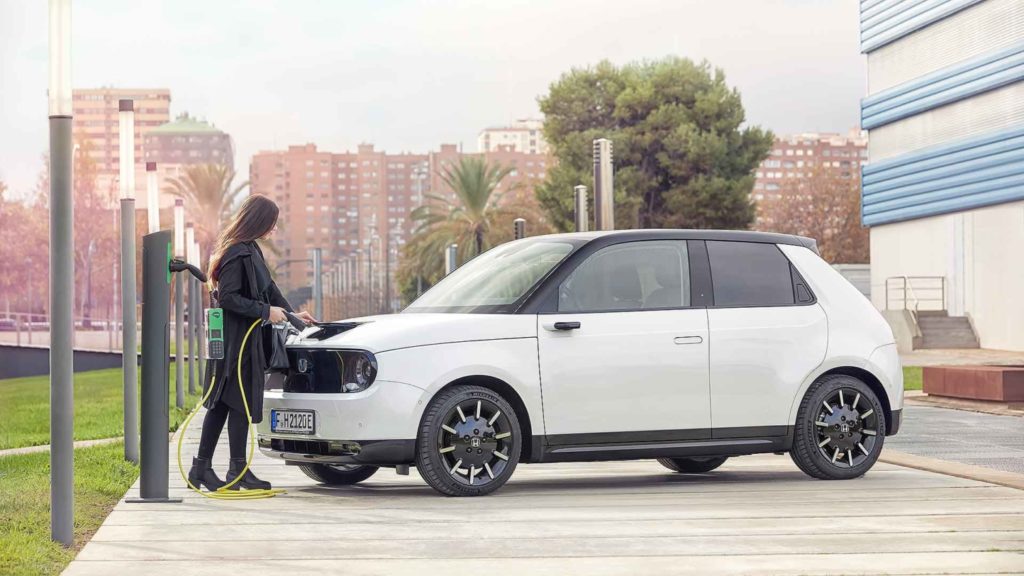 Electric cars bleep when you turn them on, rather than whirr. So pulling away (via an auto gear panel that mimics the Honda NSX) is oddly silent and uneventful. It puts you in the right mood for the Honda e experience of futuristic city motoring.

What stands out first is the panoramic visibility. Having no door mirrors is key; it’s like removing blinkers. Steering around the city seems so much easier because you can see much more at a glance – helped by the high-set seats and stubby, well-defined dimensions. Using the rear-view cameras is neat, too – they eliminate blind-spots and are particularly useful when squeezing through tight gaps or avoiding errant Valencia traffic (the digital interior mirror isn’t so crisp or useful – and goes blurry when it rains).

The e has a taut in-town ride, with a firm feel, although it doesn’t crash or bang. It also keeps the body roll-free when you’re darting through traffic, which calms down the experience for passengers. The test Advance model had the higher-output 154hp electric motor, for 0-62mph in 8.3 seconds. Punchy and immediate response means you can surge forward into gaps normal cars stumble over.

Steering has a weighty, quality feel and the Honda e is rear-wheel drive, which gives great traction away from the line, and means the steering wheel doesn’t squirm if you give it the full beans. Its party trick is in car parks: the turning circle is incredible, little bigger than the length of the car itself. You can steer from one parking space into the next-but-one, in one go. 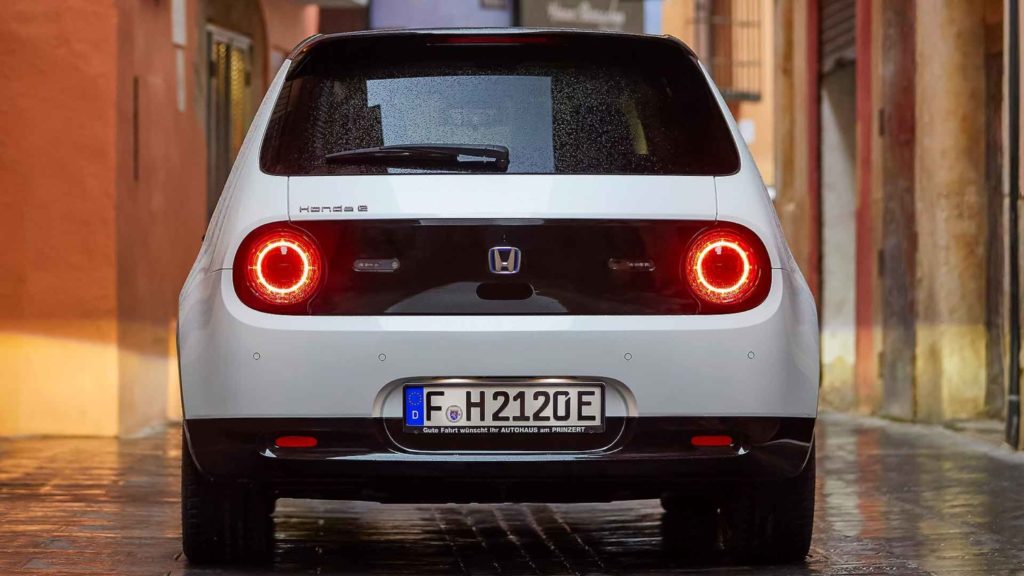 Out of city limits, the Honda e’s high-end fully independent suspension marks it out as a car with more depth than the city car norm. The ride becomes cushioned and able to soak up nasty surfaces, and it feels very stable as speeds rise. The weight of the batteries settles it on the motorway, making it uncommonly relaxing at speed for such a small car.

Handling is great fun. Commanding steering is quick and precise, turning the car in with agility and confidence. You can go early on the power to deploy the instant, powerful surge and shoot out of corners with perfect rear-led balance. It’s like a little sports car in this respect.

You can drive it as a so-called ‘one-pedal’ car, too. In normal mode, there are four stages of battery-charging regeneration (how much it slows down) when you lift the accelerator, selected via steering wheel paddle shifters. Press a button on the centre console and you get three more, stronger, levels. Mastering it is satisfying and the ‘free’ power it puts into the battery useful.

How about battery range? On a cold, rainy day, we started out with a 99 percent full 35.5 kWh battery, showing a 153 km (93 mile) range (some way off the claimed 125 miles). After a 93 km test drive, it said 55 km (34 miles) were left remaining – that’s 37 percent charge. We weren’t hanging about, and the stretch included a blast up the motorway. The media before us were probably driving it like they stole it too, so that average range should increase. It seems, however, that you can trust the Honda e’s initial range calculations.

The Honda e is ready to take fast charging: at the stopover, we plugged it in, and it said 49 minutes to a full charge again. Find a full 50 kW charge point (they’re gradually spreading across the UK) and it will go from fully flat to 80 percent charged in 30 minutes.

And the Honda e is ready to entertain you while you wait. It has an HDMI slot, so you can plug in a Google Chromecast device or, as was demonstrated to us, a Super Nintendo Classic Mini, for brilliantly crisp Mario Kart games. Sat on firm, comfortable heated seats, in such a pleasant interior, it’s a pleasant way to wait for a half-hour fast-charge. 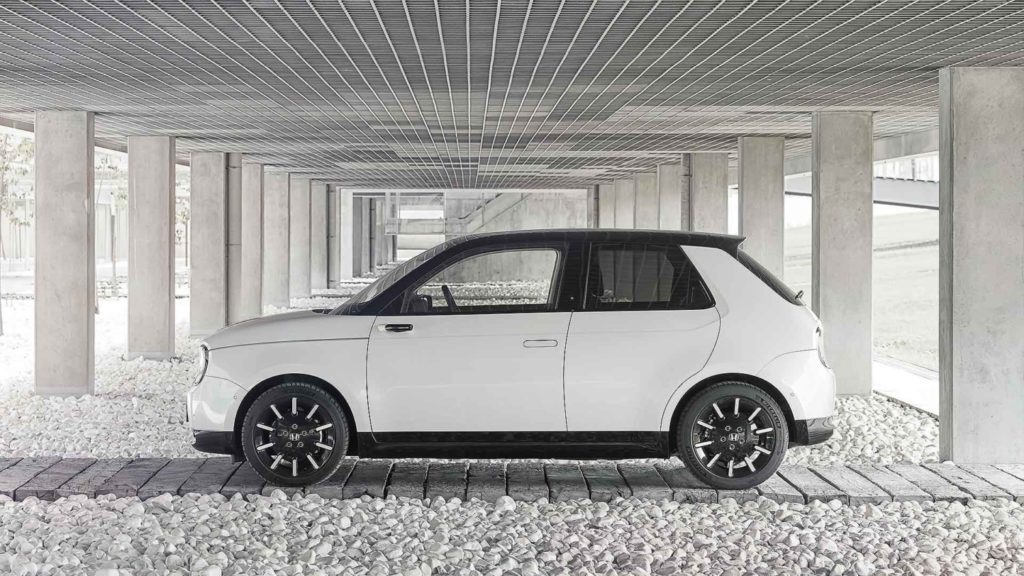 The Honda e is a class act. Probably more premium and luxurious than a BMW i3, it is a futuristic car that doesn’t short-change you on comfort or sophistication. It drives nicely, with a sporty feel that should delight enthusiasts, yet is also compliant and quiet enough for those who want to be wowed by the electric cars of the future.

The two elephants in the room are range and price. Both are unavoidable: it is a compact car precisely because it doesn’t have massive high-range batteries. And it feels so high-end because so much expensive content has gone into it. Those who understand this won’t mind paying a premium. But both factors mean it’s not an everyman EV.

Rather, it’s an innovative and authentically unique electric car that, yes, only Honda could make. And, to its core audience and far-sighted early adopters, all the better for it.