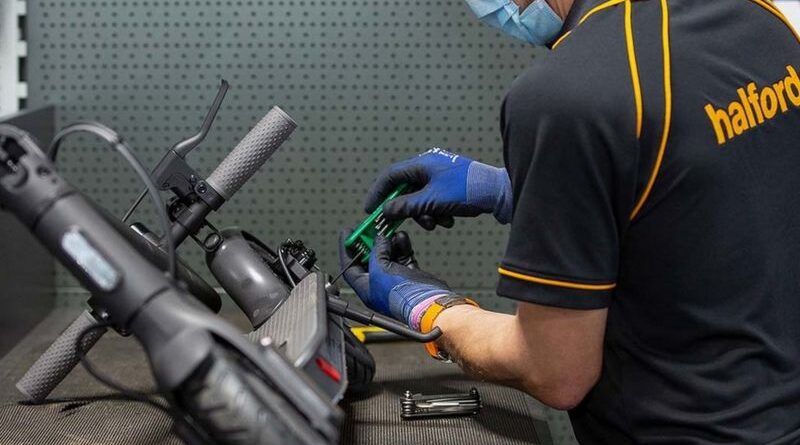 Sales have jumped at retailer Halfords following a surge in demand for e-scooters and electric bikes with total e-mobility sales rising by 184% in the first six months of its financial year.

Halfords said high demand for e-scooters had continued as the second lockdown was announced.

This comes despite the fact it is still illegal to use privately owned e-scooters on UK public roads, cycle lanes and pavements..

Although some areas of the UK are launching trials of hop-on hop-off escooters run by the likes of Voi Technology.

In the days after the second lockdown was made public, Halfords said demand for escooters rose by 71%. It added that sales of electric bikes had grown since the removal of the price cap for the Cycle 2 Work scheme last year.

As well as selling bikes, scooters and car accessories it also runs garages and was one of the “essential” retailers allowed to stay open during both lockdowns.

“We are very pleased to have achieved such a strong first half performance against the backdrop of one of the most challenging trading environments in recent history,” said Halfords’ chief executive Graham Stapleton.

However, he said the company remained “cautious on the impact that national and local lockdowns may have on our second half performance, with fewer vehicles likely to be on the road”.

Mr Stapleton added in light of the latest restrictions “and the inherent uncertainty in the current trading environment, including the outcome of Brexit negotiations”, it will not provide full-year profit guidance.

Over the six months to October, Halfords said it had seen a notable increase in electric vehicles in its garages.

The retailer said changing consumer demand and a shift towards green transport showed an urgent need for more technicians to service e-scooters and electric bikes, as well as electric vehicles.

The government announced on Wednesday that it is bringing forward a ban on sales of new diesel and petrol car sales to 2030.

Mr Stapleton said: “We will be training 100 more electric car technicians next year, bringing the total to 470. In addition, we will be growing the number of e-bike and e-scooter servicers in our stores from 400 to over 1,800.”

“This means that, by April, each of Halfords’ garages will have at least one electric car technician, with electric bike and scooter servicers in every store.”

“The uptick in cycling interest may be out of Halford’s hands, but an increasingly knowledgeable staff and excellent inventory management meant it was waiting for customers at the right time, with the right product,” said Nicholas Hyett, equity analyst at Hargreaves Lansdown.

He added that Halford’s approach of enabling customers to book a range of mobility services like MOTs, mobile tyre replacements and battery fittings using its Mobile Expert online platform was enabling the retailer to compete “in a way that a pure online offer never could”.

Electric buses built by Arrival, the UK-based manufacturer, will be tested on British roads for the first time later this year in a trial with the transport company First Group.