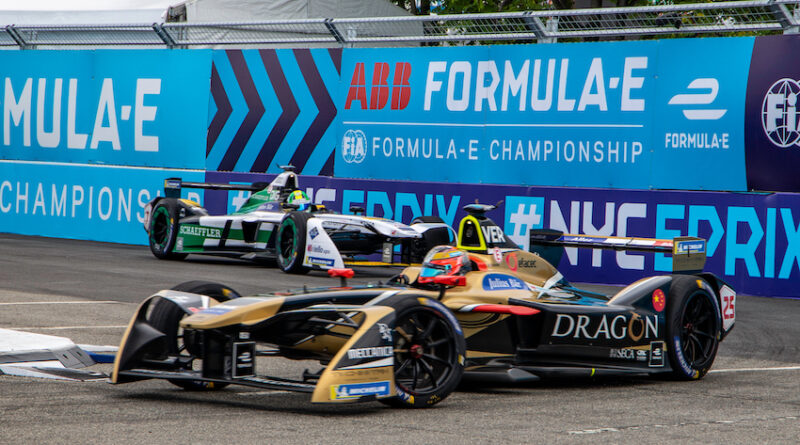 Formula E will be taking over New York City this weekend as the Championship heads to the iconic streets of Brooklyn for Rounds 10 & 11.

This weekend will be the Championship’s fourth trip to Brooklyn’s Red Hook neighbourhood and a fourth double-header in the Big Apple. The teams and drivers will be making the trip across the border, with the last event taking place in Puebla, Mexico in front of 10,000 spectators.

ROKiT Venturi Racing’s Edoardo Mortara catapulted himself to the top of the ABB FIA Formula E World Championship after a fantastic weekend on the streets of Mexico, finishing third in the first race and then claiming his second-ever Formula E win on the Sunday.

Whilst many drivers struggled on the new circuit in Mexico, it is a return to more familiar territory this time round.

The 2.320km, 14-turn Brooklyn’s Red Hook neighbourhood is a favourite for many of the drivers and the circuit remains largely unchanged from the last visit in 2019.

Throughout the race, drivers will be speeding past some iconic sights, including the Statue of Liberty and views across the Buttermilk Channel.

The return to the familiarity of New York could be perfect timing for Jaguar’s Sam Bird, who has struggled to pick up any meaningful points after a positive start to the season.

Having tasted victory on the streets of New York before, however, Bird is hoping to replicate that once again this weekend.

He said: “As we enter the second half of the season, I know our team and our car have the performance available to achieve points and podiums in New York. I have great memories here after a back-to-back victory in season three and I am very much looking to replicate this success. I’m in group two for qualifying which should be a little advantage as we aim to make it to Super Pole (top six shootout). The teams’ and drivers’ championships are very close and competitive, and I am determined to get the best result in both E-Prixs.”

Another driver looking to improve on the last race is Mahindra Racing’s Alex Simms, who had raced well in Mexico and narrowly missed out on a podium in Round 8.

Simms said: “The New York City track itself is good fun and both Alex and I have had decent success there; the only time I’ve raced there before in Season 5 was one of the highlights of the season for me, scoring my first Formula E pole and podium. It’s critical in Formula E to have smooth race days and you’re only going to get good results from hard work, so hopefully that’s going to play out this weekend. I go to New York feeling optimistic that the ingredients are there for a strong result.”

Simms’ teammate, Alex Lynn, is also looking forward to hitting the streets of NYC: “I’m super excited to race in New York this weekend. It’s such an iconic city and it’s a flagship event for Formula E, so to be returning after missing it last year is really special. I scored pole position in my first ever Formula E race there, and it’s a track that seems to suit me, my team-mate and the team. We’ll be racing on the same circuit configuration as the last time Formula E visited in Season 5, so we’re all familiar with the challenge. I’ve now scored in the last four consecutive races, so I’ll be looking to continue that consistency.”

Rounds 10 and 11 of the ABB FIA Formula E World Championship in New York City will take place on 10th and 11th July.