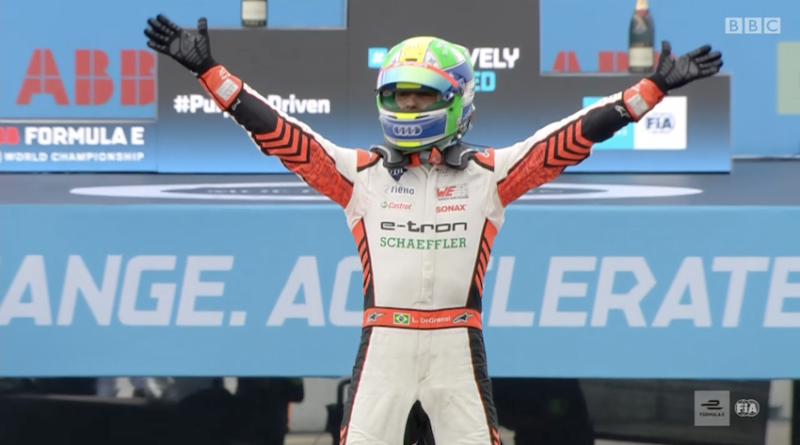 Lucas Di Grassi raced to victory in Round 8 of the Formula E World Championship, sealing a one-two finish for Audi Sport.

Di Grassi finished ahead of fellow teammate René Rast, although it looked as if Pascal Wehrlein was to claim his first-ever victory, but the Porsche driver was later disqualified for failing to declare his tyres.

This paved the way for the Audi drivers’ to climb their way onto the two highest spots on the podium, with ROKiT Venturi Racing’s Edoardo Mortara coming in third place.

It was the perfect start for Audi Sport following a mid-season break, and 10,000 supporters were in the stands to witness the action – The first time fans have been in attendance this season.

It looked set to be a promising weekend for Wehrlein, as he flew off the line to retain his place at the top of the grid having qualified in first place. Nissan E.Dam’s Oliver Rowland had qualified in second, but a stuttering start saw him fall behind at the first hurdle.

There may have been a six-week break in the season, but the action picked up right where it left off as BMW’s Maximilian Guenther flew up the inside of fellow teammate Jake Dennis, with the pair leaving the first corner in second and third place.

The first incident of the race soon followed as Envision Virgin Racing’s Nick Cassidy collided with the wall on a tight Turn 8, bringing his race to an early end as the Safety Car was deployed the first time.

A battle was about to begin between Guenther and Wehrlein, and as soon as the Safety Car made its way back into the pits, the Porsche driver got his foot down and managed to build some distance, which was helped as well by Guenther locking up coming into Turn 1.

Wehrlein saw this moment as the perfect time to trigger his first Attack Mode of the race and slipped into third behind the BMW’s in doing so, but immediately regained his position at the top thanks to the extra 35kW of power.

Further down the pack, Audi’s Lucas Di Grassi was chopping his way through the grid silently, moving from ninth to sixth and with his sights set on a higher point-scoring position.

Di Grassi’s teammate Rast was following a similar path, passing Mahindra Racing’s Alexander Sims as he moved to within almost touching distance of the leaders.

The two leaders of the Formula E World Championship, Envision Virgin Racing’s Robin Frijns and Mercedes EQ’s Nyck de Vries, came together on lap nine, as Frijns dived into Turn 11, resulting in contact between the two drivers. The move resulted in a ten-second penalty for the Virgin driver and cast serious doubt over his ability to score points in Round 8.

As Wehrlein began to extend his lead with the use of his second Attack Mode, the race was halted again as both Jean-Eric Vergne and Jaguar’s Sam Bird fell foul to the exit of the Attack Mode activation zone.

The two Mahindra drivers were at the centre of all the drama, with Alexander Sims pushing Vergne into the wall and Alex Lynn trapping Bird against the wall also. Yet again, it was time for the Safety Car.

Wehrlein maintained his lead despite backing the grid up with the Safety Car out and as it pulled in, Dennis moved past his teammate Guenther into second, with ROKiT Venturi Racing’s Edoardo Mortara sensing a chance to move into the top three.

Seemingly concerned by the presence of Mortara, Guenther opted for a defensive line heading into Turn 11 which gave the Venturi driver the chance he needed to make his way up the inside.

It was a nightmare moment for Guenther with Di Grassi, who had been lurking in the background, also seizing the opportunity and dumping Guenther back two places in just one corner.

With the final minute of the race remaining, Di Grassi rolled up his sleeves and got to work on hunting down Mortara in second which he did with ease.

Going into the final corner, Wehrlein looked to have managed the entire race brilliantly as he made his way past the chequered flag in first.

However, a technical infringement saw Wehrlein disqualified, with Porsche apparently failing to declare their tyres for the race.

Heartbreak for the German, but delight for Audi as Di Grassi and Rast were bumped up into first and second place, ahead of Edoardo Mortara.

Despite a disappointing race for Robin Frijns, the result means the Envision Virgin Racing driver just about retains his spot at the top of the drivers’ standings, ahead of DS Techeetah’s Antonio Felix da Costa who finished in sixth. Picking up just two points, Mercedes EQ’s Nyck de Vries remains in contention for the Championship but slipped down into third place.

Round 9 of the Formula E World Championship takes place tonight with the second part of the Mexico E-Prix in Puebla.