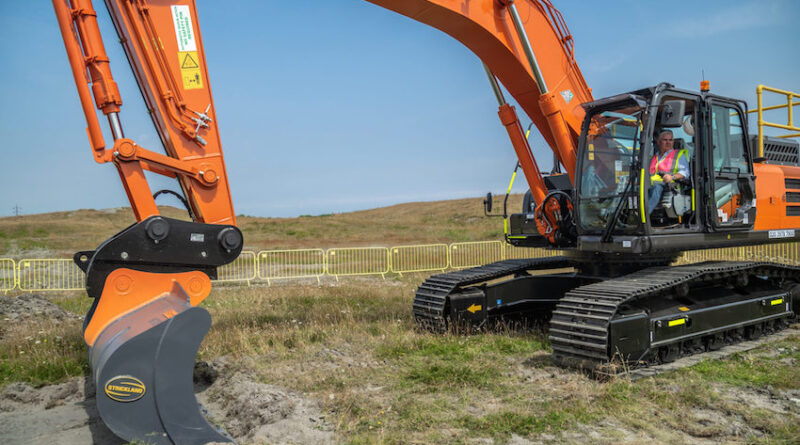 The project will be built in three phases each of 10GWh to a total capacity of 30GWh by end-2027 onwards. Once at full capacity, the gigaplant will have a production capability equating to approximately enough cells for around 300,000 electric vehicle battery packs per year, intended primarily for the automotive industry.

Planning permission was granted back in July by unanimous decision, a move that was described by Northumberland County Council as a “game-changer.”

Britishvolt is the second gigaplant site in Europe to start construction, and first-mover for a full-scale gigaplant in the UK.

Richard McDonell, Britishvolt project director, said: “Today is a historic day as it marks the start of construction on the UK’s premier gigaplant, Britishvolt – a landmark event for UK manufacturing and the automotive industry on the road to zero.

“This initial phase will see the site cleared and preparatory work carried out for the services and infrastructure that will support construction activity. This is yet another milestone on our journey to building the UK’s first full-scale gigaplant. It’s a boost for UK plc and the real kick-start of the energy transition, of which Britishvolt batteries will be at the very heart.

“Main construction will see over 2,500 people involved in the project, a huge positive for the UK.

“This is an exciting announcement and marks the tangible start and progress of the main factory building where we will be producing some of the world’s lowest carbon, sustainable battery cells to help accelerate the transition to a low carbon future.”

Peter Millett, high tech managing director for ISG’s Engineering Services business, added: “The positive momentum, passion and sense of genuine excitement that underpins this nationally important project is driving the entire team forward at pace, and this significant construction milestone demonstrates our collective commitment to UK manufacturing and to supporting communities across Northumberland. This is the starting point for the transformation of a disused site in Cambois with a legacy in the industrial past, that from today will become a beacon for innovation and advanced manufacturing right here in the North East.”

Glen Sanderson, leader of Northumberland County Council, also commented: “It’s great to see work starting on the ground on a site which the council and partners have been actively engaged on in recent years to make it an attractive proposition for investors.

“Since we granted planning permission work behind the scenes has continued at pace so to see enabling works getting underway is fantastic – not just for the council and Britishvolt, but for everyone in the county.

“With thousands of jobs in the pipeline and billions of pounds of investment this is such a good news story for Northumberland and the wider region and we look forward to following progress over the coming months.”