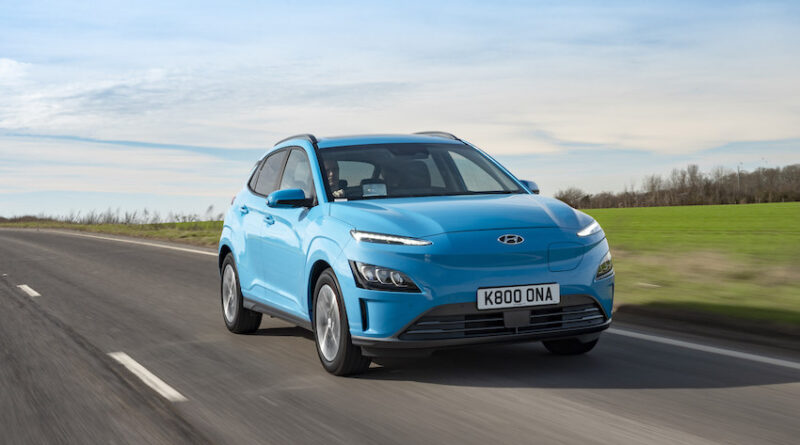 How does the 39kW Premium version of the Hyundai Kona Electric manage to compete with its growing list of rivals? EV Powered finds out.

Not too long ago, the Hyundai Kona Electric was one of few options for those that wanted an electric vehicle that was cheaper than a Tesla, but also had a decent range on it, too. Now, however, the Kona Electric finds itself competing with a long list of other suitable options, most notably the Kia eNiro, the Peugeot e2008 and the Volkswagen ID.3.

So, the most obvious question for the Hyundai Kona Electric is how does it compare to its new rivals, and where does it rank in the overall EV market?

Ignoring the garish Smurf-blue colour that our test car came in, the Hyundai Kona Electric is actually quite a good-looking car. The 2021 model has had a facelift, and thankfully, Hyundai removed the strange, cross-stitch-like pattern from the grill and replaced it with a really smooth, flowing front end.

Looking at the car straight on, it does share some similarities with a Tesla, particularly with the ultra-thin headlights and the overall roundness of the body.

As technically an SUV, the Kona Electric is quite large and it does have a lot of presence on the road, it certainly does stand out from the crowd (even if that was mostly due to the horrible blue colour).

There are a couple of odd-points to mention, too. The charging point for the car is located at the front, which is nice and convenient for when using a public charger. However, it is slightly off-centre, which does look quite awkward and it upsets the aesthetic of the front of the car.

For a large car, it does have fairly small alloys, too. Even when you go up to the higher-spec versions of the Hyundai Kona Electric, it only comes with 17” alloy wheels which, for a car of this size, seems very small.

The exterior of the Kona Electric is hit and miss to say the least, and unfortunately, it doesn’t get much better once you step inside, either.

There are certainly some highlights when it comes to the interior of this car, although the main story is one of further disappointment, unfortunately.

Throughout the entirety of this car, there is an abundance of cheap, scratchy materials, especially in places that are designed for comfort and convenience. One example of this is on and around the windows, where a hard plastic makes it especially uncomfortable to rest your arm when driving.

There are adjustable lumbar seats that are supposed to offer support when driving but truthfully, I found these to be quite awkward to sit in and I never settled into them when driving this car for a whole week.

In the boot, there is disappointing amount of boot space, with only 332L available. To put that into context, that’s even less than a Renault Zoe – not great for an SUV.

It’s not all doom and gloom, however. The technology in the car works well, with a very handy and responsive drivers display, as well as a crisp and clear 10.3″ infotainment screen which syncs up with both Apple CarPlay and Android Auto.

In the back, there is quite a lot of space, even for someone over 6-feet like myself. There is a decent amount of legroom and headroom and, even though the seats aren’t the comfiest, I could feel myself being relatively content in the back of the car on a long journey.

From the driver’s seat

Now, to put this review into context, the version of the Hyundai Kona Electric we had on test was the 39kW Premium version, rather than the 64kW Ultimate version.

This is important to note because there are vast differences with the two specs, especially when it comes to range and price.

When you’re behind the wheel of this car, those alternatives do appear to be vast upgrades on the Kona Electric.

The first thing to talk about when it comes to this car is its speed. This is by no means a quick car and it hasn’t been designed to be a quick car, either. With its 39kW battery, this version of the Kona Electric has a 0-62mph time of 9.7 seconds, which is well over a second slower than the ID.3 and the eNiro.

As I just mentioned, the Kona Electric isn’t designed to be quick, it’s designed to be practical (which is debatable considering how tiny the boot is). However, it still is an electric car and any EV should give you that great feeling of pinning you back in your seat when you hit the accelerator and you don’t really get that with this car. One of the biggest plus-points for EVs in the argument with ICE vehciles is that they are tremendously fun to drive, but this Kona Electric is very plain and very vanilla. That speed does increase to compete with the Kia and the VW once you go up to the highest spec version, with a 0-62mph time of around 7.7 seconds.

One main benefit of this not being a super-speedy car, however, is that you can really maximise its range. If you had that instant pace at your disposal, it’s quite easy to fly around everywhere and see your range fade away quite quickly, but because this 39kW version isn’t the quickest, you may as well put it into Eco+ mode and get as many miles as you can from your charge.

Because you’re not slinging this car into corners and drag racing people off from a set of red lights, I did find the Kona Electric to be quite smooth to drive. Of course, big speedbumps and potholes do jolt you about quite a lot, but on the whole, it has a very smooth ride with very little lean in the body. It’s quite annoying that the interior is so uncomfortable because in terms of just driving, it’s actually quite a pleasant experience.

One thing that isn’t too pleasant however is the regenerative braking. There are three different settings for this, with barely any difference between them. For an electric car, you want the regen-braking to be predictable and you want it to bring you to a complete stop fairly quickly. However, the regen-braking on the Hyundai Kona Electric felt quite lethargic and almost to the point where it was completely unnoticeable. Again, one of the biggest plus-points for EVs is that one-pedal driving ability, but I did find myself having to use the brake pedal more often than not with this car.

The overriding feeling when behind the wheel of this car is one of frustration. It could be such a good car, and it has all the makings to be, but there is no heart and soul to it. Although I only had this car for one week, I couldn’t ever see myself forming a bond or a connection with this car. It isn’t particularly quick, it’s uncomfortable to sit in and it’s awkward to operate, and that tells the whole story of the Hyundai Kona Electric.

Whilst it hasn’t been the most positive review of an electric car, it has to be said that when you go up to the 64kW Ultimate version of the Hyundai Kona Electric, it does become a serious contender in the battle between the eNrio, the e2008 and the ID.3