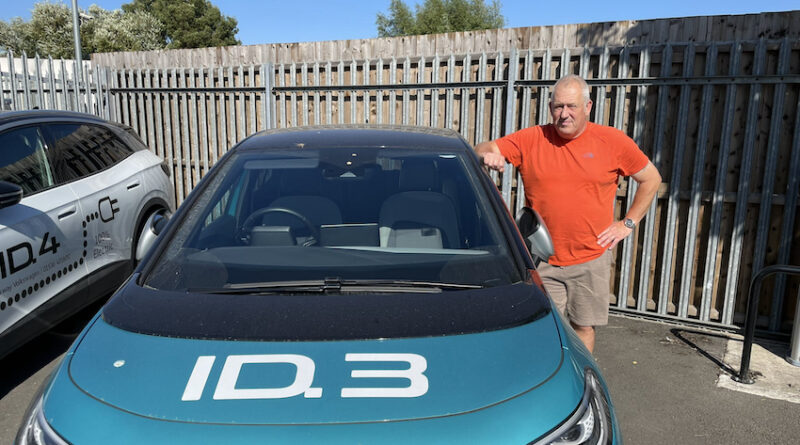 EV Powered put a lifelong petrolhead behind the wheel of an electric vehicle to see if he could be convinced to make the switch.

In the latest episode of the Everything EV podcast, host Charlie Atkinson was joined by his father, Paul Atkinson, a lifelong petrolhead and self-proclaimed sceptic of electric vehicles.

Paul had never driven an electric vehicle before and, throughout the journey, he had many questions regarding charging, running costs and the infrastructure supporting electric vehicles.

Before the pair set off in the Volkswagen ID.3, Paul explained what he currently drives and what he uses it for on a day-to-day basis.

He said: “My current car is a Volkswagen Tiguan, 2-litre turbo diesel. I love it, it does everything it says on the tin, but it is a very boring, grandad car. But, the most important thing is that for £75 of diesel, I can get just under 700 miles off a full tank.

“I use my car for commuting and the odd bit of social, domestic and pleasure. I travel eight miles to work in the morning and eight miles home which takes me 13 minutes each journey. I take my dogs out at the weekend or we go down to Hertfordshire which is probably a journey of 150 miles round trip which we do once every six weeks or so. I find typically I have to fill my car up about once every three and a half weeks, once a month if I’m lucky, but usually, I can’t get to the end of the month without having to put some diesel in it.”

Range and charging were the main areas of concern for Paul, who had questions about how long it took to charge, the availability of public charging points and the costs associated with charging.

However, Charlie explained: “If you were to own this ID.3 and you were out and about, you would notice how many EV chargers there are, and there are so many different apps out there where you can plan charging.

“If you were to charge overnight where it doesn’t matter how long it takes to fill up because you’re sleeping or relaxing, it’s only going to costs you about £7 to fill up and that’s still going to give you between 250 to 280 miles of range. You can’t argue that electric cars are so much cheaper to run than petrol and diesel cars.”

“It drives lovely,” he said. “I do like it. I like the quietness of it, I like the torque and it is a very, very nice car. It’s very futuristic. My Tiguan is a great car, it’s well-engineered, it’s well made but crikey it’s boring. This is a little bit fun and trendy.”

As the journey continued, Paul raised questions regarding the cost of electric vehicles, public charging and what happens if you were to run out of charge, all of which were answered by Charlie.

At the end of the episode, Paul gave his final verdict on the ID.3 and on electric vehicles in general: “I am going to seriously consider it. I do like the idea, and I am the perfect market. I can afford a half-decent car and I don’t need to do loads and loads of miles. When I gave you the example earlier of “what if I was to go to Scotland?” Well, I haven’t done it in the last 30 years so it’s a bit of a hypothetical conversation.

“You’ve almost turned me and I certainly look at them more favourable.”