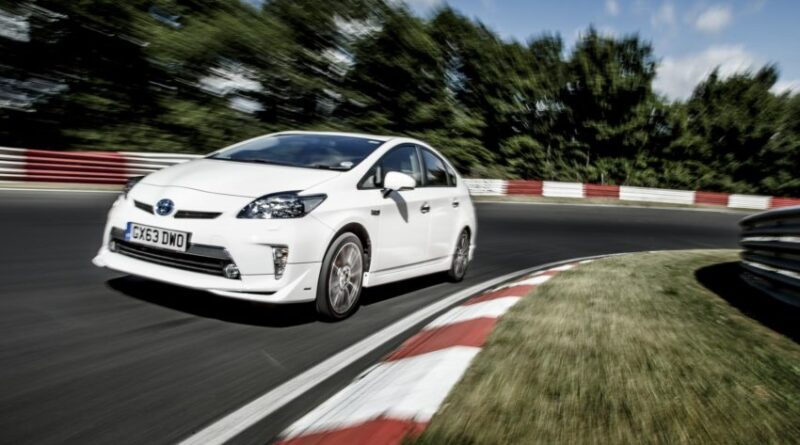 Launched in 1997 the original Toyota Prius was the world’s first mass-produced hybrid-powered car.

As a vehicle that was ahead of its time, the Prius reshaped the motoring landscape bringing its hybrid tech into the mainstream market highlighting to the industry and consumers alike that cars could be made cleaner and more efficient.

And people have obviously come to understand and appreciate what Toyota were and are still doing with the brand having delivered its two millionth hybrid electric vehicle in Europe back in September 2018.

That figure means its hybrids make up more than 50 per cent of all the alternative powertrain vehicles sold in Europe – more than all the other hybrids, plug-in hybrids and electric vehicles combined. Impressive.

Now in its fourth generation, which each successive model setting new benchmarks in fuel economy, emissions and efficiency, the basic technical premise that gave Toyota its breakthrough with Prius continues to support development of new mobility solutions, from the second generation Toyota Mirai hydrogen fuel cell saloon scheduled for release in Japan, Europe and North America next year to the all-electric LQ which strides ahead of the Concept-i, with Level 4 autonomous driving function and an on-board artificial intelligence personal assistant.

We’re here to talk about the 2019 Toyota Prius Plug-in however, which was launched in the summer of 2019 with a new, five-seat interior. The updated model brings with it a series of new features and options; this is what we thought of it after one week.

The car’s dynamic capabilities are rooted in its use of the first platform developed under the Toyota New Global Architecture (TNGA) philosophy. Known as the GA-C platform, which also underpins the C-HR crossover and Corolla model range, Toyota says it plays a defining role in offering a more engaging driving experience.

Rather than using firmer springs which can compromise ride and comfort, Toyota has improved the car’s handling with the quality of said chassis, which is further supported by a body that is 60 per cent more rigid than before (thanks to extensive use of high-strength steels), plus a lower centre of gravity (-2.5cm to be exact). They have also used new double wishbone rear suspension, while up front the MacPherson struts are revised with an increase in the incline angle of the shock absorbers and the use of slant bearings.

The overall result is it’s more responsive and stable than its predecessor, with less body roll through the corners, and a smoother ride. It’s not a driver’s car, but steering and handling are both good, making it comfortable, easy and pleasurable to drive.

Performance has improved with Toyota’s first Dual Motor EV Drive system and a larger, higher capacity lithium-ion hybrid battery. In EV mode its great – feeling fast and responsive, but once the battery is depleted, the 1.8-litre Atkinson cycle petrol engine starts and it’s lacklustre – taking more than 11 seconds to reach 62 mph. It also gets very noisy when you press the accelerator flat to floor, which is a result of the CVT gearbox holding the revs high for maximum acceleration.  Together with the road noise from the fuel-saving tyres and it’s very tempting to turn the radio up at higher motorway speeds. 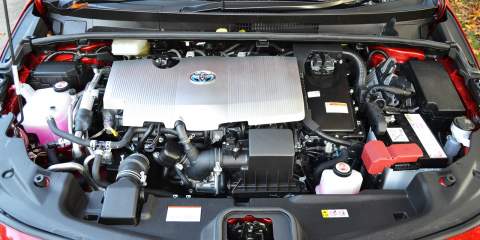 The Prius Plug-in’s rechargeable powertrain delivers an official 217mpg (WLTP data) with 29g/km CO2 emissions (NEDC correlated data), and allows an all-electric EV driving range of up to 34 miles (doubling the driving range of its predecessor and allowing much higher speeds to be attained – up to more than 80mph). The car doesn’t quite deliver on that promise in the real world, but I was averaging around 90mpg when regularly charging the car – and when I wasn’t around 60mpg, which is pretty impressive. On a full charge (on a cold day) driving a mix of country roads and dual carriage way I managed just over 25 miles of zero emissions driving.

That TGNA platform apparently gave the designers a freer hand to pen a car that was ‘visually richer’ – think low-slung stance, a more athletic profile, and sharper lines. Up front there is a new bonnet and slimmer headlamp units that are very akin to the Alfa Romeo’s Tonale Concept plug-in SUV. Aerodynamics was at the forefront of the designers’ minds with this generation of Prius plug-in and as a result it secures a world-class 0.24 coefficient of drag.

Inside, the dashboard wraps around the driver and the panel instrument cluster features dual 4.2 inch full colour TFT screens with easy to read displays: the screen nearest the driver presents vehicle speed and ancillary data, while the second screen provides information about the hybrid system and eco-driving tips and performance, together with multimedia and climate control system details and driver assistance alerts. It’s fairly unconventional consolidating operational functions closest to the driver and placing the information functions further away, but it certainly helps it to look more high tech and striking.

Overall the cabin environment is light offering great visibility of the road ahead (sadly the rear visibility was poor despite the cut out under the boot spoiler) and spacious, we like the attention to detail such as the Prius logo on the air vents, the high quality of the materials and solid build quality. The latest specification Toyota Touch multimedia system, with a seven-inch touchscreen panel is designed like a tablet and is fairly intuitive to use, just a little slow to respond at times and the touch sensitive buttons are a little awkward to use on the move.

The new look interior of the five seater Prius Plug-in introduces a new seat fabric pattern and two interior colour options: Cool Grey, with grey seat bolsters, and Black. The car’s trim has also been changed to all-black, including the centre console, shift lever and steering wheel, matching the 2019 Prius.

Perhaps it is because I am taller than average, but I found it very difficult to get comfortable – the seating position was slightly awkward and there wasn’t much adjustment, plus the steering wheel could use a little more range in terms of both vertical and horizontal adjustment. The efficient use of space inside the Prius does mean plenty of leg and head room for all five occupants however, not to mention ample storage. Load space is improved thanks to the use of a smaller, more energy-dense hybrid battery that is located entirely beneath the rear seats and that aforementioned new double wishbone rear suspension system but we found the size woeful. The car’s boot floor is a ridiculous 11cm higher than the regular Prius making it so shallow you’d struggle to fit a very large suitcase in it.

The Prius Plug-in five door hatchback is only available in two grades – Business Edition Plus, which was the model we had, and Excel. It is well-equipped with Toyota Safety Sense standard on both versions, including the Pre-Collision System with pedestrian detection, Lane Departure Alert with steering control, Adaptive Cruise Control and Road Sign Assist. Additional safety features include a Blind Spot Monitor and Rear Cross Traffic Alert. Comfort and convenience items include dual-zone automatic air conditioning, rear passenger footwell heating and Smart Entry and Start.

There’s also a solar panel roof option for £1500 (This is only available with the Business Edition Plus trim), which according to Toyota adds three miles and you lose the standard head-up display, blind-spot monitor and rear cross-traffic alert. Probably not worth parting with your hard earned for.

First introduced in 2012, with a second-generation arriving five years later, the 2019 updated model with a new five-seat interior is a welcome addition and should help to improve sales. Already a multi-award winner (named ‘Best Large Family Car’ in the 2017 Next Green Car Awards and ‘World Green Car’ in the 2017 World Car Awards ceremony), the Prius Plug-in delivers the best of both worlds with a EV range of more than 30 miles and class-leading fuel economy (and practicality for those that suffer with range anxiety) when the petrol engine needs to be called upon.

While it’s more economical than any direct rival is capable of, and about 10 per cent up on what the regular Prius offers, Toyota charges almost eight grand more for its Plug-in version. So if you live up to 30 miles away from work (and you can charge there as well), the Toyota Prius Plug-in makes for a cheap option. However, it you do lots of miles, you’re better off sticking to the brand’s hybrid, and it’s for that reason why we only gave it 3.5 stars out of 5.