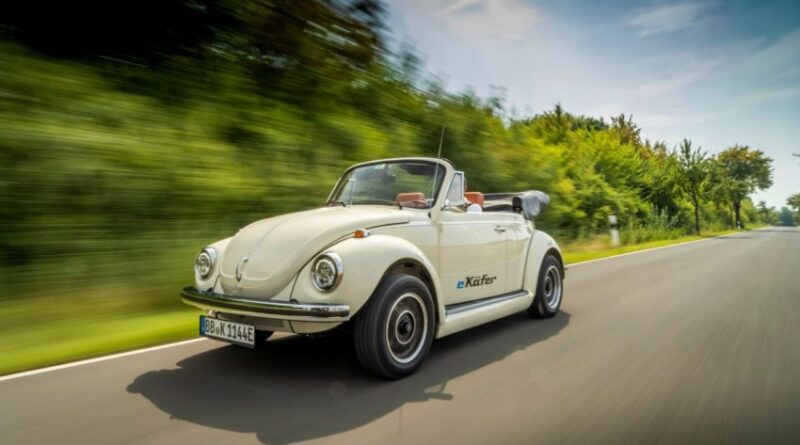 VW becomes the latest automaker to standardize the electric conversion of its classic cars – starting with classic Beetles.

They unveiled the first prototype ahead of the International Motor Show (IAA) in Frankfurt, Germany.

Last year, Jaguar announced that it was bringing back the classic E-Type to life with a new electric conversion kit based on I-Pace technology.

Now VW is announcing something similar for classic Beetles based on the new e-up! powertrain.

The German automaker says that it can fit a up to 36.8 kWh battery pack into what it is now calling the e-Beetle: “The battery system is built into the underbody and consists of up to 14 modules, each with a capacity of 2.6 kWh. The lithium-ion battery modules cumulatively deliver energy of up to 36.8 kWh. The higher performance and the increased weight due to the extent of electrification require the adaptation and reinforcement of the chassis and the brakes.

Despite the new total weight of 1,280 kg, the e-Beetle accelerates to 50 km/h in just under four seconds and to 80 km in just over eight seconds. The range of the e-Beetle, which reaches top speeds of up to 150 km/h, is 200 km – a comfortable distance for a relaxing day out in an electrified classic car. In the event that the e-Beetle runs out of electricity during the trip, the built-in series-produced components allow for fast charging via a combined charging system.

As a result, the e-Beetle can store enough energy for a journey of over 150 km after charging for around an hour.”

While VW manufactures all the components for the electric conversion, they partnered with eClassics in Renningen, near Stuttgart for the installation.

Thomas Schmall, Member of the Board of Management of Volkswagen Group Components, commented on the project: “The electrified Beetle combines the charm of our classic car with the mobility of the future. Innovative e-components from Volkswagen Group Components are under the bonnet – we work with them to electrify historically important vehicles, in what is an emotional process. We are also providing Beetle owners with a professional conversion solution, using production parts of the highest quality.”

They didn’t release details about pricing and availability of the conversion yet, but they are already talking about adapting the conversion kit to other classics.

Schmall added: “We are already working together to prepare the platform for the Bus. An e-Porsche 356 could also be pursued in the future.”

They are also considering using components from the new MEB platform instead of the e-up!.