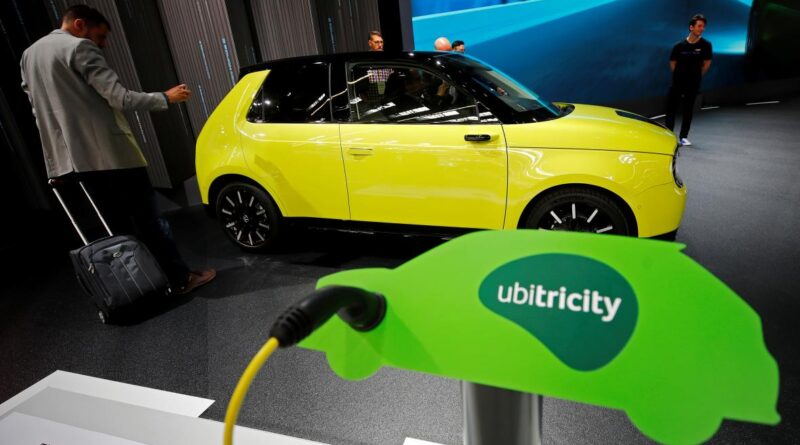 Royal Dutch Shell has agreed to buy one of the UK’s biggest electric vehicle charging networks as the oil giant steps up its push into the power sector.

The Anglo-Dutch group said that it would acquire Ubitricity, which operates more than 2,700 public charging points, for an undisclosed sum.

Ubitricity was founded in 2008 in Berlin and specialises in on-street charging points that can be installed into existing street lights or bollards, which it says removes the need for planning consent and reduces set-up costs.

Shell said that Ubitricity had the “largest public EV charging network” in the UK, with a 13 per cent market share according to Zapmap, a third-party website. Zapmap ranks the company just ahead of BP’s Pulse network, which it says has more than 2,500 public charging points.

BP also lays claim to being “the largest public network of electric vehicle charging points in the UK” and says that it “operates more than 7,000 public charging points across the UK”. The discrepancy is understood to relate to different definitions of what counts as “public”.

Royal Dutch Shell is Europe’s biggest oil company, with profits of $15 billion last year, primarily from producing and selling oil and gas. It is expanding into the electricity sector with ambitions to become one of the world’s biggest power companies as it seeks to eliminate its carbon footprint to “net zero” emissions by 2050.

Shell is due to report full year results next week, after a tough 2020 in which it was forced to cut its dividend for the first time since the Second World War and booked record impairment charges. It is scheduled to unveil a strategic update the following week.

Shell already has about 100 electric vehicle charging points on its UK service station forecourts and is aiming to double that by the end of this year; globally it has about 1,000 such installations across 430 retail sites.

It also owns New Motion, which provides customers access to a network of almost 180,000 public charging points globally including more than 3,000 in the UK at locations from supermarkets to offices to homes.

Shell said the acquisition of Ubitricity, which also has charging points in Germany and France, was expected to complete later this year, subject to regulatory clearance.

István Kapitány, executive vice president of Shell Global Mobility, said: “Working with local authorities, we want to support the growing number of Shell customers who want to switch to an EV by making it as convenient as possible for them. On-street options such as the lamp post charging offered by ubitricity will be key for those who live and work in cities or have limited access to off-street parking.”