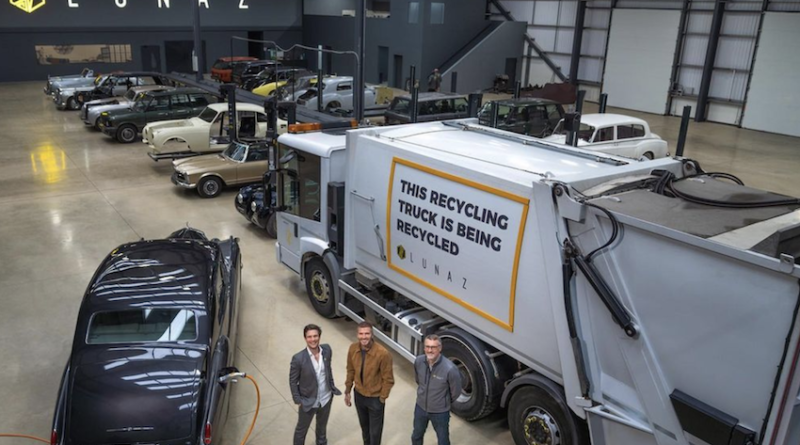 David Beckham has taken a 10% stake in a UK company that converts conventional petrol and diesel-powered vehicles to electric.

Silverstone-based Lunaz was founded in 2018 by David Lorenz and F1 World Championship winning technical director Jon Hilton, and has since been converting conventionally powered classic cars into electric ones, including the world’s first fully electric Range Rover, Jaguar, Bentley and Rolls-Royce.

Beckham is joined by investors, the Reuben Brothers, the Barclay Family and Los Angeles based developer and tech entrepreneur Alex Dallal. They join founding backers, the Art Advisor and clean-tech investor CJ Jones and hospitality and tech investor Navid Mirtorbi.

David Beckham said: “Lunaz represents the very best of British ingenuity in both technology and design. I was drawn to the company through their work restoring some of the most beautiful classic cars through upcycling and electrification. David Lorenz and his team of world-class engineers are building something very special and I very much look forward to being part of their growth.”

After confirming backing from Beckham and a group of strategic investors, the firm is also announcing ambitious plans to grow its offering to the upcycling and conversion of industrial vehicles on a mass global scale.

According to Lunaz, the move responds to the pressing and legislated global requirement to transition fleets of all types to clean-air powertrains, in particular the planned ban on the sale of new Internal Combustion Engine (ICE) vehicles from 2030. By this date, it is projected that more than 2 billion conventionally powered vehicles will exist on the planet that will eventually need either scrapping or converting.

The company says it will be significantly cheaper and ecologically more sustainable for fleet operators in the commercial and public sectors to convert HGVs and other lorries to electric than to scrap them and replace them with new electric vehicles.

For example, the Lunaz re-manufacturing and electrification process will extend the life by up to 70% of the existing weight and embedded carbon within a vehicle. Commercially, a municipal authority could save more than 43% in the Total Cost of Ownership (TCO) of an upcycled and electrified refuse truck versus replacing their existing fleet with new equivalent vehicles.

As well as this, Lunaz has moved into an expanded manufacturing facility adjacent to its current site within the Silverstone Technology Cluster, in order meet its ambitions and following sustained demand for converted classic cars.

This position provides Lunaz with essential proximity to the very best automotive, engineering and technology talent. By the end of 2021, Lunaz Group says it will double the number of jobs for engineers and manufacturing technicians. It also projects the creation of 500 highly skilled jobs by 2024.