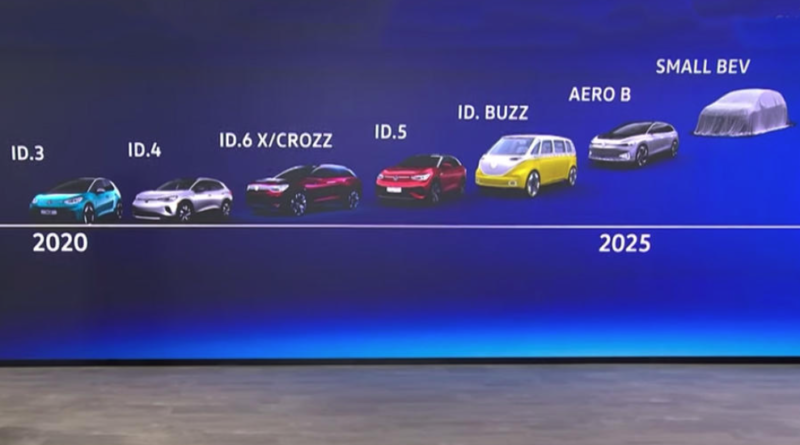 Volkswagen will further accelerate its electrification plans, with boss Ralf Brandstätter pledging that more than 70% of its cars sold in Europe will be fully electric by 2030 – double VW’s previous target.

The firm had previously pledged that 35% of the Volkswagen brand’s European sales would be fully electric vehicles by the end of the decade, but Brandstätter said it is time to ramp up that target to make VW “the most attractive brand for sustainable mobility”, But he added that combustion-engined cars will continue to play a key role for the firm, committing to next-generation versions of key models including the Golf and Tiguan.

Under the new Accelerate strategy, Volkswagen has also vowed that more than 50% of its sales in the US and China will be fully electric by 2030, and Brandstätter said the firm will also invest heavily in developing its software and digital technology – including autonomous driving systems.

“The automotive industry is changing fast,” said Brandstätter. “We will fundamentally change Volkswagen in the coming years. We intend to defend our market leadership on a clear position: Volkswagen will be the most attractive brand for sustainable mobility.”

The firm has committed to launching at least one EV per year to meet its renewed electric sales targets. The firm will launch three EVs this year: the four-wheel-drive hot ID 4 GTX will be followed by the coupé-styled ID 5 SUV, with the China-only ID 6 large SUV revealed next the end of the year. The production version of the ID Buzz will arrive in 2022, followed by the ‘Aero B’ estate – previously by the ID Vizzion concept.

Brandstatter also vowed the long-anticipated small electric car, likely called the ID 1, would arrive in 2025, two years later than originally planned. The firm’s new flagship ‘Project Trinity’ EV, based on an advanced new platform, is due in 2026.

With the take-up rate of electric vehicles likely to vary in different regions worldwide, Brandstätter added that the firm will not move away from combustion-engined models entirely, saying “we will still need combustion engines for a while, but they should be as efficient as possible”, particularly through the use of plug-in hybrid technology. The firm has committed to next-generation versions of the Golf, Tiguan, Passat and T-Roc.

Although the UK will ban sales of most new non-zero-emission vehicles by 2030, an exemption will be made until 2035 for certain hybrids capable of ‘extended’ running on electric power – so VW’s commitment makes it possible models such as the Golf could continue to be offered in the UK for longer than expected.

However, Brandstatter admitted the Touran MPV was unlikely to be replaced, and was also non-committal on the future of the Arteon executive saloon.

A key part of VW’s Accelerate growth plan is heavy investment in and commitment to developing software, connected systems and autonomous technology. “If you believe with electric cars alone we’ve arrived in the future, already you’re wrong,” said Brandstätter. “The key is digitalisation. The car is now a software-driven product, like an internet device. Cars will become more intelligent and safer. Electrification was just the beginning, the real disruption is coming.”

The firm will invest £13 billion in the next five years in digital systems and autonomous technology and is aiming to develop new business models by selling charging services and connected systems using over-the-air updates.

Brandstätter said VW is aiming to ensure “autonomous driving will be experienceable for many people by 2030”. He added: “This technology must not become the privilege of the few. With six million units per year, our brand has the volume to scale up this dfifficult-to-engineer technology and roll it out worldwide.”

The Trinity project will be a key part of this development, and will offer level two-plus autonomy – effectively advanced driver assistance systems – when it is launched in 2026, with the target to upgrade to level four, allowing the car to drive itself with no supervision on certain roads, by 2030.

VW is also planning to develop a ‘neural network’, where its connected EVs pool their data to provide information for autonomous driving functions and other systems. The ID 3 and ID 4 will be the first machines that will provide data for the network, with major growth likely in 2026 when next-generation versions of ICE models are fitted with systems that can contribute. Brandstatter deascribed it as a “self-learning system of millions of cars.”