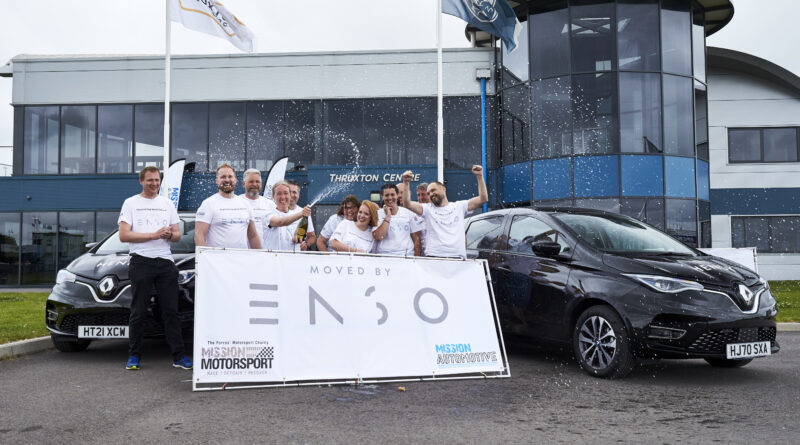 At the UK’s fastest circuit, Thruxton in Hampshire, a Mission Motorsport team of: British veterans, the spouse of a serving soldier, and a hypermiling expert, undertook an assault on the existing record for the longest distance driven in a Renault ZOE, on a single charge.

Equipped with ENSO’s pioneering range extending EV tyres, Mission Motorsport deployed its considerable endurance racing experience to maximum effect. The 2018 French record of 7.9 miles per kilowatt hour – an incredibly high bar – was surpassed by the British team with 9.14 miles per kilowatt hour, without the benefit of higher ambient temperatures.

Driving day and night, for over 24 hours, at the optimum average speed of 19mph, the Renault ZOE equipped with ENSO’s EV tyres reached a world beating 475.4 miles on a single charge, smashing the French record by 124.4 miles. An identical Renault ZOE, equipped with its standard OEM tyres and driven by the same team, reached 424.7 miles in comparison, well in excess of its official WLTP range of 245 miles.

“ENSO’s mission is to deliver the most efficient, durable and sustainable tyres for EVs. ENSO is driven by delivering innovation in the tyre industry and is already working with leading EV carmakers and fleets. This new world record proves that our ultra-energy efficient EV tyres have a huge role to play in extending electric driving range and addressing range anxiety. By delivering ultra-low energy consumption per mile, our EV tyres not only save cost and electricity, but allow us to dramatically extend EV-range, moving the tyre industry truly into the electric age,” Gunnlaugur Erlendsson, ENSO CEO, said.

Where the EV rubber hits the road

To tackle this unique world record, Mission Motorsport teamed up with ENSO to see just how far a Renault ZOE could travel on a single charge. The perfect partner for the mission, ENSO delivered the ideal EV tyre, based on its work to develop sustainable tyres without passing the cost to drivers or the environment.

To deliver the two-pronged attack on the record, the Mission Motorsport team used two different sets of tyres on two identical Renault ZOEs. With its OEM tyres fitted as standard, the first Renault ZOE achieved an impressive 424.7 miles to smash the existing record of 351.0 miles set in 2018.

However, the identical Renault ZOE, fitted with ENSO’s propriety EV tyres, carried on thanks to its unique tyre construction and greater energy-efficiency, to notch up a total of 475.4 miles, i.e. extending the EV range a further 50.7 miles, an increase in EV range of 11.27%.

Mission Motorsport aids in the recovery of those who have been affected by Military Operations by providing opportunities through motorsport and the automotive industry. Launched at Thruxton, in March 2012, the charity has today returned to the fastest circuit in the UK, nine years later to raise the bar for British hypermiling.

“Thruxton was the obvious choice for this record attempt, but despite being the UK’s fastest track, the key to hitting 475.4 miles was finding the optimum speed and smooth consistent driving. Backed by ENSO’s unique EV tyre technology we were certain we could break the record, but what we couldn’t have foreseen was the incredible difference in efficiency, distance and feel with the ENSO tyres,” said James Cameron, Mission Motorsport CEO.

To ensure that the record was an honest endeavour, the pair of identical Renault ZOEs were supplied by the Hendy Group in complete showroom specification, with no special tuning. The factory fitted OEM tyres were also retained on the first vehicle, while ENSO’s EV tyres were fitted to the second vehicle. To make sure that both sets of tyres were fitted, aligned, and set correctly, specialist PROTYRE was on hand to assist both Renault ZOEs eke the most miles from each charge. The previous hypermiling record of 351 miles was set in France in 2018, with a Renault ZOE driving around the Paris Peripherique.