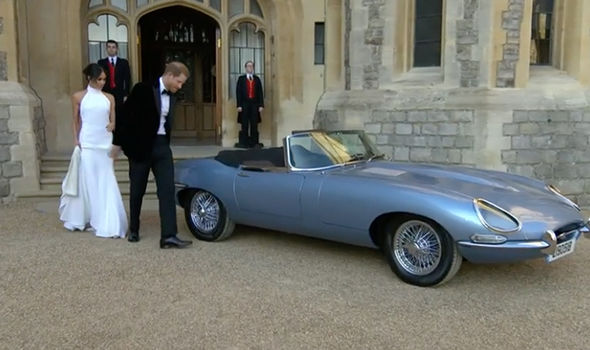 Classic cars with muscular engines and sleek, timeless designs are being given an added attraction by wealthy collectors — battery power.

It seems that with concerns over air pollution, some owners are reluctant to be seen behind the wheel of an ageing gas-guzzler, no matter how stylish.

Collectors with deep pockets are silencing their Ferraris and Lamborghinis, stripping out petrol engines in favour of green power. Motor experts have reported a surge in demand for electric conversions of classic cars over the past year.

One company that specialises in high-performance electrification projects said it had more than 150 orders on its books. Manufacturers such as Jaguar, Volkswagen, Renault and Aston Martin are cashing in on demand by producing vehicles using bodywork from their most famous

The trend has caught the eye of royalty and celebrities. The Duke and Duchess of Sussex drove to their wedding reception last year in an electric-powered 1968 Jaguar E-Type. Ellie Goulding, the pop singer, reached her own big day in an electrified 1970 VW camper van. The conversion of these motors, however, has blown a few gaskets among classic car owners.

The Fédération Internationale des Véhicules Ancien — the association of historic automobile clubs — issued a terse statement in October, saying that ripping the internal combustion engine out of a car would render it ineligible to be classed as a “historic vehicle”.

The group said: “It is not, in our opinion, the shape or body style of a vehicle that makes it ‘historic’ but the way in which the entire vehicle has been constructed and manufactured in its original form.”

Norman Crowley, the founder of Irish-based Electrifi, which carries out “hypercar” conversions, insisted that many car owners were enthusiastic about the idea. His company has 153 orders on its books. It buys Ferraris, Lamborghinis, Aston Martins and Corvettes, turning them into high-performance electric cars using Tesla components. Most have the performance of a Formula-E racing car. They do not come cheap. The company has signed a deal to convert Jaguar E-Types to be sold for €850,000 (about £726,000) each.

Electrifi has also acquired Electric Classic Cars, in Powys, which converts cars to order. One of their customers is Dev Patel, the actor, whose Fiat 500 is being converted.

Peter Brazier said that the company revived his 1982 Ferrari 308 GTSi, which he had owned for 27 years. Mr Brazier, from near Leighton Buzzard, Bedfordshire, said that the £60,000 conversion doubled the car’s power. “I can now switch it on and go,” he said. “There is no waiting for the oil pressure to build up or temperature to look right because it’s old and fragile.”

The conversion rankled with some classic car enthusiasts though. Mr Brazier was expelled from the Ferrari Owners’ Club of Great Britain, ending a 27-year association.

Sales of electric cars have jumped recently, with almost 33,000 registered in Britain in the 11 months to the end of November, a rise of 136 per cent compared with the same period last year.

But not everybody welcomes the change. Quentin Willson, the motoring journalist, said he was torn between wanting to encourage electric cars while being concerned at the expense.

“If you can afford it, it’s a lovely idea,” he said. “However, the conversion process is very expensive.

“The question you have to ask is whether you’ve diluted the value of the car in the process. It is going to be a substantially different car after this.”