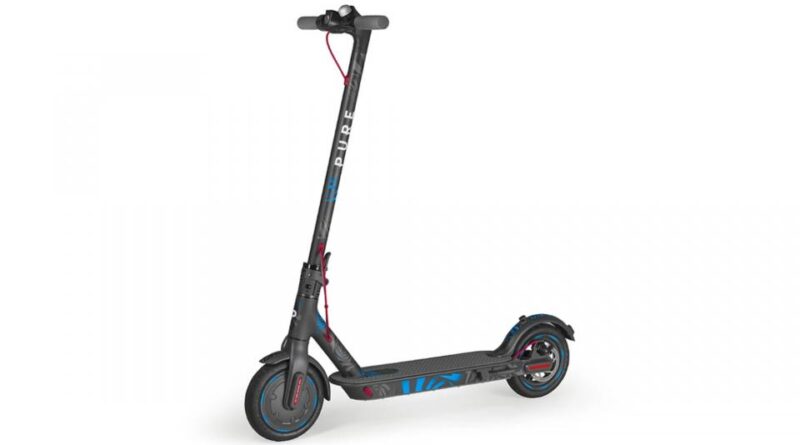 The Xiaomi M365 is currently the best-selling electric scooter worldwide and it’s arguably the smartest scooter on the planet for its price.

It connects to an app on your phone to activate cruise control mode, so you don’t need to press the throttle at all times, and you can also lock the scooter’s motor when you’re stepping away from it. This, coupled with its intelligent battery management system and a useful energy-saving mode, will keep you scooting for longer.

The M365 is no slouch in the design department, either. Its sleek frame is made from aircraft-grade aluminium alloy and the central mechanism is so simple that you can fold it down in just five seconds. It comes in 13 colours and two exclusive designs (Camo and Safari). Intelligent, affordable and practical, the Xiaomi M365 is smart in every way.

If you want more bang for your buck, we suggest upgrading to the new Xiaomi M365 Pro, which is the best e-scooter among all the units we’ve reviewed so far. Even though it costs about £120 more, this e-scooter has a better display, longer mileage and three riding modes to help you better control your top speed depending on where you’re riding.

You can also buy another version that comes with pre-inserted puncture prevention fluid so you never have to worry about a punctured tyre again.

The e-scooter is so easy to spot. It has an all-black frame, accented by red wires and reflectors on both tyres. Given its sleek finish, good build quality and general ease of use, it’s no surprise that the M365 is one of the best-selling e-scooters in the world.

The Xiaomi M365 is pretty reasonably priced for its build and specifications. For example, its closest competitor is the Ninebot Segway ES2. Even though both e-scooters have the same weight (12.5kg) and top speed (15kph), the Xiaomi M365 has a maximum range of 18.5 miles on a single charge, as compared to the Ninebot Segway ES2’s 15.5 miles. We also prefer the Xiaomi’s pneumatic tyres, which do a better job of shock absorption than the Ninebot’s solid rubber tyres.

The default mode on the Xiaomi M365 has a top speed of 15 miles (25kms) an hour but you can enable Eco mode by double-pressing the power button after you’ve switched the scooter on. You’ll know you’re in Eco mode when the lowest of the four battery indicators turns green. The scooter’s maximum speed in this mode is 11mph (18kmph), making it easier to control, even though this comes at the cost of the default mode’s acceleration and speed.

The M365 has a headlight at the front of the handlebar you can turn on by pressing the power button once. This does a good job of illuminating your path ahead as well as alerting others of your presence in darker conditions. By default, the tail light flashes when you activate the brakes but we recommend keeping the tail light on at all times. You can do this by downloading the free Xiaomi Home app (Android, iOS) and pairing your scooter with the scooter via Bluetooth.

Apart from the tail light control, the app displays other relevant information including your current battery level, average speed and trip riding mileage. Unless you have a mobile phone holder attached to your e-scooter, you won’t be able to see this information in real-time but the remaining battery level, which is shown more precisely than on the handlebar LEDs, makes this worth doing. The scooter’s LED battery notification might show you one light, for instance, when you only have 10% capacity remaining.

The app conceals two additional features that elevate this scooter from good to great: Cruise Control and Motor Lock. As the name implies, Cruise Control senses when you’re riding at a constant speed for a few seconds, after which you’ll hear one long beep. You can then release the throttle to travel continuously at that speed, giving your thumb a well-needed rest.

The Motor Lock feature comes in handy if you need to leave the scooter outside – when popping to the shops, for instance. Swipe right from the main app screen when paired and you’ll see a Motor Lock sign. This not only locks the motor so it can’t be wheeled away, but it also activates a motion-based alarm. If anyone moves the scooter, it beeps loudly and continuously. Being in locked mode also prevents the scooter from being turned off so it isn’t easy to circumvent.

These features all work well but I found the Bluetooth connection with my phone was patchy and often prevented me from accessing the M365’s advanced features instantly. The scooter also kept making different beeping sounds, none of which were easy to interpret because all you see are on the scooter itself are the four battery LEDs. Sometimes, I mistook long beeps for cruise control only to release the throttle and realise it was trying to tell me something else entirely.

Thankfully, this doesn’t happen all the time, and it’s good to know the Xiaomi M365 is IP54 rated, too, meaning it’s protected from water spray from any direction, including its battery port, provided you’ve secured the rubber battery flap firmly after charging it. While washing the scooter with water isn’t recommended (a simple wipedown will do), this rating means you don’t have to dart toward the nearest shelter if it starts raining on your way into work.

Out on the road, the Xiaomi M365 works effortlessly with minimal fuss. Yes, there’s no speed display but this means you tend to concentrate more on the road and the scooter’s 8.5in pneumatic tyres do a great job of keeping your ride smooth overall but the roughest of urban surfaces.

The Unagi Model One and Ninebot Segway have solid rubber tyres and while these never need to be filled with air and never puncture, you do feel every bone-crushing bump when the road isn’t smooth. I was even able to ride the M365 over grass without too much discomfort.

I was especially impressed at how well the M365 copes with hills. I once came to a near-halt on a steep incline and assumed I would have to get off and push but, admirably, the motor managed to get the scooter back up to speed quite quickly.

The scooter’s 120mm disc brakes do a good job of bringing you to a halt without lurching you forward, too, unlike the electric brakes on some of the other e-scooters. There are online tutorials on how to adjust your brake callipers using the Allen key if you feel they’re too loose or tight. The M365 also has regenerative braking, which puts the motor in reverse when you press the brake throttle, thereby conserving some of your power as you come to a halt.

Another great feature of the Xiaomi M365 is that it’s completely silent, so silent in fact that I often had to ring the bell to alert people I was behind them. Of course, there’s the usual engine hum but that’s barely noticeable. The only time you’ll hear the motor audibly is when you’re tackling steep inclines.

The Xiaomi M365 is not perfect by any means. It doesn’t have an LED display like most modern-day e-scooters do and we found the Bluetooth connectivity patchy, slightly tarnishing our otherwise great experience. These minor foibles aside, the M365 is the best value e-scooter you can buy and that’s at the normal price of £430. Put simply, if you’re looking for fuss-free rides without breaking the bank, the Xiaomi M365 should without question be your first choice.