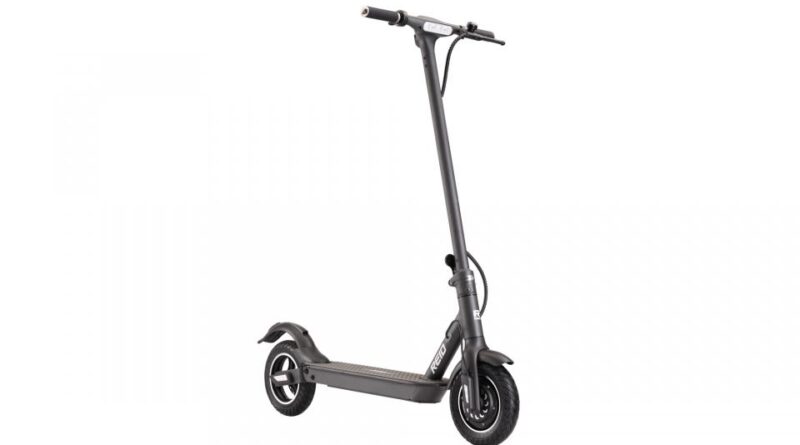 Australian company Reid has made a name for itself recently with its range of bikes and e-bikes. The Reid E4 electric scooter is its first foray into the world of e-scooters; it’s early days, but right off the bat, we can say with certainty that the firm is off to a strong start.

While the Reid E4 electric scooter is more widely available, it’s the Reid E4 Plus we’re reviewing here (and recommending) because it improves on its predecessor in most ways for not much more money.

What you need to know

While both Reid e-scooters – the E4 and E4 Plus – have the same range (17mph) and maximum speed (15.5mph), the latter has a 350W motor compared with the E4’s 250W unit, giving it more torque and thereby justifying its heavier 14kg weight. Another differentiating factor is the wheels. The E4 Plus has 10in wheels with rear suspension, which makes for a much smoother ride compared with the regular E4, which has 8.5in wheels and no rear suspension. Since there’s only a £100 difference between them, it’s obvious which e-scooter you should buy.

The Reid E4 Plus costs £599, which is around £150 more than our favourite budget e-scooter, the Xiaomi M365. Other than that, there isn’t all that much between them. Both scooters share a similar top speed and maximum range and I’d be happy to own either. If pushed, though, I’d opt for the Reid E4 Plus thanks to its more powerful motor and bigger, solid wheels.

A more appropriate comparison might be with the Xiaomi M365 Pro, which currently retails at the same price. The M365 Pro has almost double the range (45km) of the Reid E4 Plus (25km), although it’s unlikely you’ll need to go that long at a stretch without charging. In terms of motor power, the Reid E4 Plus again edges out the M365 Pro with 350W to the Xiaomi’s 300W.

The Reid E4 Plus is very easy to set up. Once out of the box, all you need to do is secure the handlebars in place using the hex wrench provided. Unlike other e-scooters, you can also adjust the brake lever orientation to keep it parallel with the handlebar or at a slightly lower angle if you prefer.

To unfold the e-scooter, simply push down the rear fender, pull up the handlebar until it’s upright, then pull up the quick release at the bottom of steerer tube until it clicks in place. Initially, I struggled to fold the e-scooter, only to later realise there’s a tiny safety clip to the left of the quick release that you need to first remove before reversing the above process. 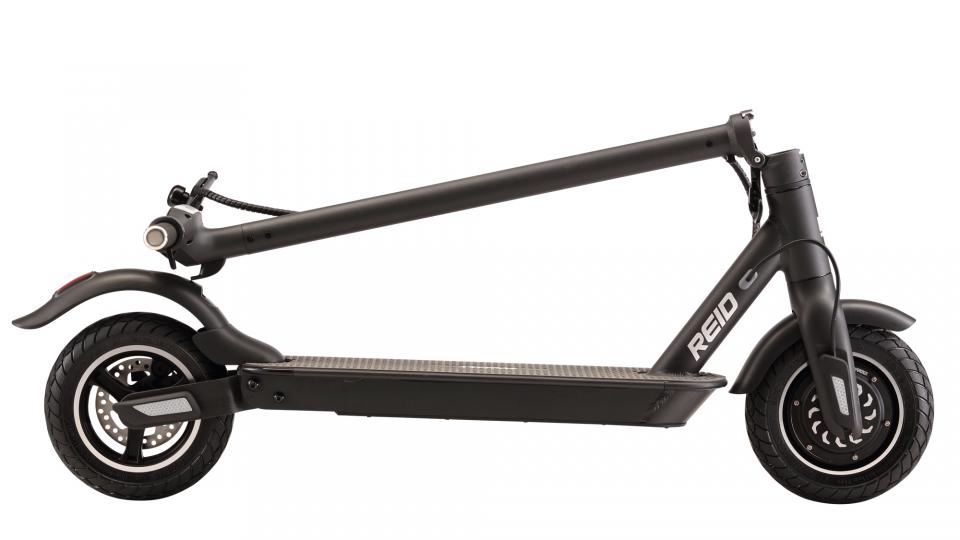 The Reid E4 Plus e-scooter is taller than most other units we’ve reviewed with unfolded dimensions of 120 x 52 x 120cm. While this shouldn’t be a problem for most people, it’s something to bear in mind if you’re shorter because you can’t adjust the height of the bars.

The second striking feature of the E4 Plus is its wide rubber grips, which offer good control when riding. The accelerator, brake and bell are all within easy reach and there’s even a small hook just below the bars. While this is primarily used to lock the scooter closed when folded, it doubles up as a bag-holder if you decide to pop to the shops on your way home.

The e-scooter usually comes with some charge, so you can test it out straight away if you want to. If you need to charge the E4 Plus, simply release the small flap below the front wheel – where the base meets the stem – and connect the charger that comes in the box. It takes around five hours to fully charge the scooter’s 7.5Ah lithium batteries.

Embedded in the centre of the handlebars is a blue LED display, which acts as the scooter’s main control centre. On it you’ll see important information such as power levels, battery capacity and speed while a single button immediately below it is used to control the Reid E4 Plus’ various functions.

If you happen to turn on the e-scooter in the dark, you’ll notice two other things immediately. The first is that the scooter comes with pulsing ambient underdeck LED lights. Unlike the Ninebot Segway ES series, you can’t change the colours of these lights.

The second is that the headlight, even when not illuminated, is surrounded by another coloured, always-on LED running light, useful for those times when you forget to turn on your headlights when riding at night. The headlight itself is pretty good, too. Comprising four white LEDs, it’s the brightest I’ve seen on any scooter I’ve tested and can be activated with a double-press of the centre button.

As with many modern e-scooters, you can pair your smartphone with the Reid E4 Plus via Bluetooth (both Android and iOS are supported) and this gives you access to a few additional features.

The app’s main screen displays an odometer and the e-scooter’s charge level; it also gives you the option to lock the scooter with one click, which is useful if you need to leave it unattended for a short time. Doing this locks the e-scooter’s wheels – making it difficult to move – but it doesn’t beep continuously like other models we’ve reviewed. 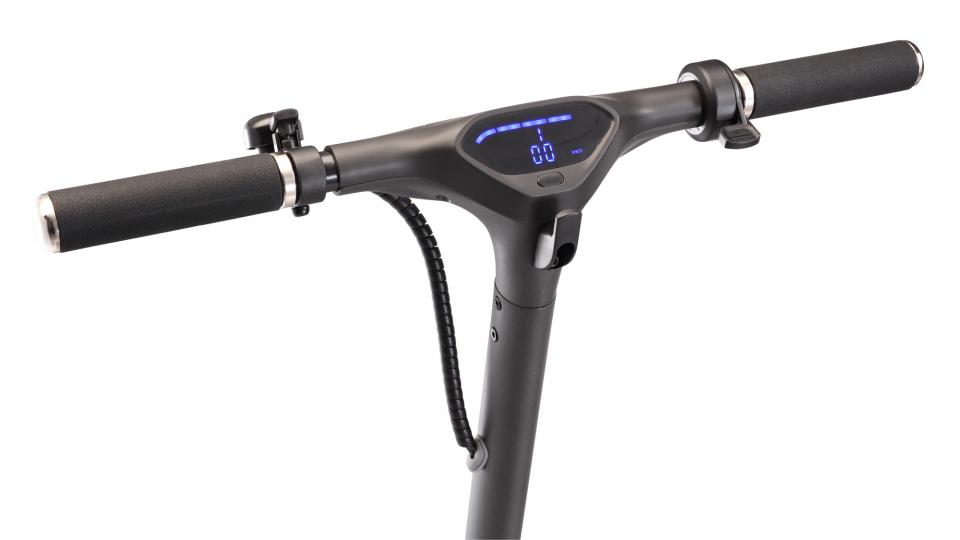 You can use the app to change the coloured running light surrounding the headlight and to toggle your headlight on and off. There’s also a “Friends” section, possibly indicating a social element where you can compare your stats with others but we couldn’t test this because we don’t know anyone else who owns a Reid e-scooter. More usefully, you can change various settings, including switching between kilometres and miles per hour on the display, and enabling or disabling cruise control.

There’s also a ‘Startup setting’ here that lets you choose whether you want the throttle to work when the scooter is stationary (Zero startup) or only when in motion (Non-zero Startup). Alas, compared with other e-scooters we found Cruise Control on the Reid E4 Plus didn’t work that well. The Xiaomi M365, for example, sounds an audible beep to let you know when cruise control is active. The Reid E4 Plus provides no such indication and it deactivates its Cruise Control automatically at the slightest change of speed.

The Reid E4 Plus has three riding modes – indicated by 1, 2 and 3 on the display – each of which has its own top speed. The lowest is around 6mph, which is around brisk walking pace; the second tops out at 11mph, which is great when you’re in an area with people around; and the highest tops out at 15mph, which is ideal for when you’re riding with a clear unobstructed path ahead.

The throttle on the Reid E4 Plus needs about a 3cm push to get to its lowest end, which is a fair amount more than other e-scooters. The great part about this ‘give’ is that it makes it easier to adjust your speed, even in the most powerful riding mode.

When you want to bring yourself to a more abrupt halt, the Reid E4 Plus has mechanical rear disc brake and an additional rear foot brake. I found the foot brake was useless at high speeds but the disc brakes worked well, bringing me to a complete stop in under three metres while travelling at full speed.

It’s a comfortable ride, too. As with most electric scooters these days, the Reid E4 Plus comes with solid rubber wheels. While these have obvious advantages over pneumatic tyres, such as never having to worry about punctures, our biggest issue is that they tend to lead to a more bumpy ride on uneven terrain.

While that’s still true of the Reid to a certain extent, of all the e-scooters with solid rubber wheels I’ve ridden the Reid E4 Plus is by far the most comfortable. This is due to two things: it has rear suspension to soak up any sudden impact, and hollow air pockets inside the wheels to take the edge off uneven terrain. Yes, you can still feel the bumps, but they aren’t as bone-jarring as those on other solid-wheeled e-scooters such as the Ninebot Segway ES4 and the Unagi Model One.

My only quibble with the Reid E4 Plus is that the display isn’t quite bright enough and is difficult to read in direct sunlight. That said, after you set the mode you want you shouldn’t be looking at your display anyway. The wide handlebars also make it slightly difficult to change riding modes when riding at speed.

All things considered, the Reid E4 Plus is a seriously impressive e-scooter that’s sensibly thought through and well put-together. I love the combination of comfort and practicality that the solid wheels and suspension provide and the way the scooter feels to ride is a breath of fresh air. If you’re thinking about buying an e-scooter, this should definitely be at the top of your list.

Yes, there are cheaper alternatives such as the Xiaomi M365 and you can’t go wrong with the Xiaomi M365 Pro, either. For its build-quality, looks, features and sheer riding experience, however, the Reid E4 Plus is fully deserving of its five-star Best Buy rating.