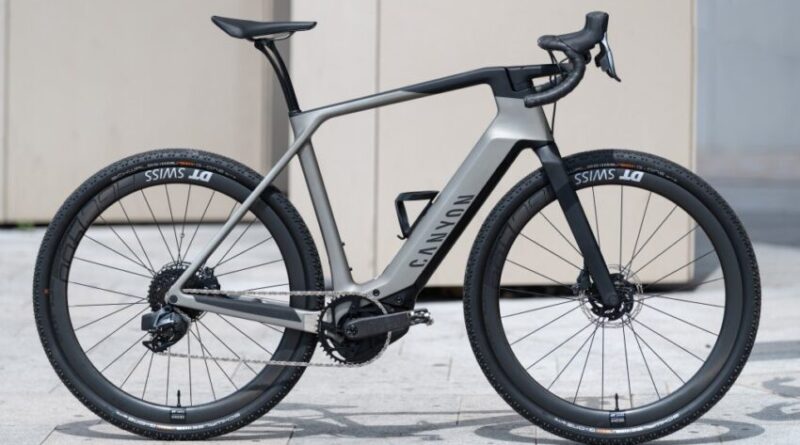 The Canyon Grail:On is the German direct-to-market giant’s first exploration into the growing world of electric gravel bikes, two of the fastest-growing sectors in the bike market.

An evolution of Canyon’s existing non-motorised Grail gravel bike, complete with distinctive double-decker bar, Canyon has ventured into the world of electric gravel riding with the Grail:On for a consumer ‘looking to go further’ and push the boundaries of drop handlebar off-road riding.

Canyon released its first two e-road bikes, the Endurance:On and its flat-barred twin the Roadlite:On ealier this year, which both rely on the Fazua motor system. Canyon uses this system because it is one of the lightest on the market and when it cuts out over 25kmh, as per UK law, it does not offer any resistance against the rider’s continued effort.

As for Canyon’s e-mountain bike range, that has long relied on the Shimano Steps system thanks to the linear curve of assistance that it provides.

With the new Grial:On, Canyon has utilised the Bosch Performance Line CX motor system which strikes a deal between the Fazua and the Shimano systems.

‘We decided fairly early on in the development that power is a big part of the experience when riding e-gravel, especially with that point-and-squirt responsiveness that allows you to take the fastest line to the highest point. The Bosch Performance Line CX Gen4 system puts out 85 Nm of torque and was originally designed for heavier e-MTBs,’ explained Canyon.

Using a 500Wh battery built into the bike’s chunky downtube, the motor comes set with four modes all controlled via a small head unit attached to the handlebars.

Tour and Eco support represent the two lowest settings which offer a ‘cadence-neutral’ boost, helping the rider with less-noticeable assistance regardless of effort. Then you have ‘Sport’, which provides a stronger power boost at higher cadence.

However, it is in ‘Turbo’ mode that the Bosch system shines brightest. It offers ‘up to 340% of the rider’s own power’ and has a claimed peak torque of 85Nm, which is really quite powerful. In effect, switching the bike into Turbo mode is essentially a guarantee that you’ll have the power on tap to flatten any gradient or tame any surface.

The question of battery life comes with no simple answers because there are so many variables. Terrain, weight of the rider, style of riding, mode used and weather are just a few of many but Canyon says the system can last up to 120km.

It also adds that full charge can be reached in eight hours and that if you were to buy an aftermarket charger, that could even be reduced to four. It’s also worth noting that you can remove the battery to charge it, a positive for those with limited space within the household.

A redesigned geometry from the existing Grail gravel bike

If you think that Canyon has simply bolted a motor system in to the bottom bracket of its existing Grail gravel bike for the Grail:On, you are mistaken. While the bikes look very similar, a lot has changed in the Grail:On.

The geometry measurementss include the Hover bar on both bikes, so the stack on the Grail:On has been bumped up by 28mm to 686mm (size medium) while the reach has been shortened from 457mm to 449mm. Discounting the Hover bar adjustment, these numbers produce the most upright riding position across Canyon’s drop handlebar range.

Add to that a wheelbase that has been stretched a further 20mm and Canyon has created a bike that should feel incredibly stable, planted and able to balance the excess weight added by the Bosch Performance Line CX system.

In order for the longer wheelbase not to affect handling, Canyon has reduced the length of the stems specced across the range, a nod to recent mountain bike trends. For example, a medium will come with a 75mm stem.

An additional benefit of elongating wheelbase for stability is that the Grail:On now has room for bigger tyres, 50mm Schwable G-One Bite tubeless out-the-box tyres in fact. These are a full 10mm wider than the non-motorised Grail and can be run at considerably lower pressure for better comfort.

These, across the entire range, are attached to DT Swiss’s gravel-specific HG 1800 Spline wheels that while a touch heavy, are much more robust when dealing with the torque provided by the motor thanks to stainless steel spokes and a reinforced hub.

Canyon has ditched provision for a front mech with the Grail:On, entrusting the capabilities of 1x by fitting Sram Force eTap AXS to its top-specced model and Shimano’s GRX to its three further models. All will come with a 44t chainring on an FSA carbon crankset and a cassette ratio of either 11-36 or 11-42.

You’ve also got to consider that the Grail:On will be running wider tyres than its competitors. While that adds weight it opens more off-road possibilities. The main contributor to the new bike’s heft is the Bosch Performance Line motor system, but in return you get a lot of power and range.

To counterbalance the heavyweight frame, Canyon has fitted the Grail:On with 160mm disc rotors as standard, and sensibly allows the possibility of upscaling to 180mm if you really want to test the bike on downhill trails.

Just like its non-motorised twin, Canyon has once again specced the Grail:On with that double-decker Hover handlebar. It is a divisive feature which makes the fact that Canyon will not be selling the Grail:On with standard bars a bold move.

Another handover from the existing Grail is the excellent VCLS 2.0 seatpost. It’s leaf spring design builds flex into the bike’s rear end in an attempt to promote comfort.

Competitive pricing has always been one of Canyon’s main selling points and it is no exception with the Grail:On.

The Grail:On takes inspiration from the existing Grail gravel bike and adds plenty of punch with a Bosch motor system.