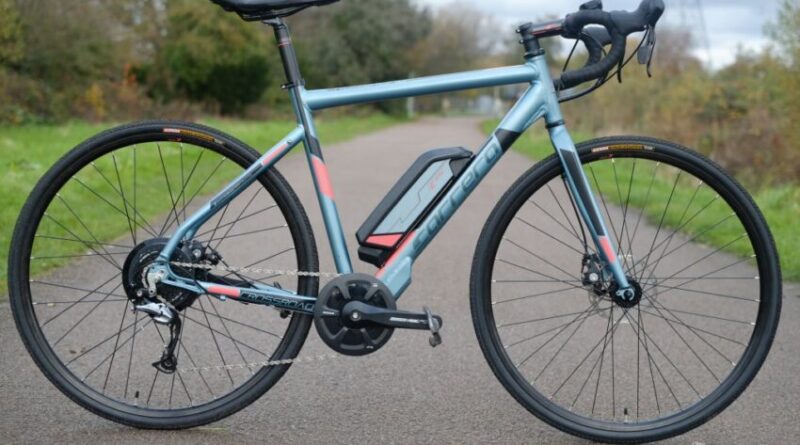 Halfords claims its new Carrera Crossroad is the cheapest electric road bike available, and the first to go sub-£1,000, if only by a penny. Scraping in under most employers’ Cycle to Work scheme limit, we got one in to see how it scored.

Getting the Carrera Crossroad out of the box is something of a lift-with-your-legs-and-not-your-back job. At 18.9kg, it’s not light, although by e-bike standards it’s not actually too bad.

From the moment I switched it on, I liked the Carrera Crossroad. It feels like a very beefy endurance road bike, but with tons of extra effort-free acceleration.

With three assistance modes, each of which gives you a decent shove forward, even the lowest eco setting is pretty gutsy. Personally, I was happy with this. I don’t buy all this ‘you on a good day’ subtle extra power stuff. If you buy an e-bike, you want to know you’re riding one. And no one on the Carrera will feel shortchanged in that respect.

On the road, the extra acceleration boosts your confidence when riding in traffic, giving you a clear run from the lights and allowing you to overtake more easily. At the same time, large tyres mean you can also use it on unpaved terrain, where the 15.5mph limit seems like more than enough.

Also, while I don’t want to put every electric bike reviewer out of a job, considering all e-bikes in the UK are limited to 15.5mph, they’re kind of all the same. For instance, I’m not sure there’s any benefit to having deep-section wheels on a bike that, because of its electric motor, is heavier than an entry-level none-electric racer.

What’s more important is that they’re comfy and durable. Something the relaxed and stable Carrera easily manages.

SR Suntour provides all the electric gubbins, from the lockable 310 watt-hour battery on the downtube to the combined torque and cadence sensor and 250-watt HESC rear hub motor. It’s all well-proven stuff from a reputable brand, and so should allow for ongoing servicing.

Upfront you get a display unit allowing you to select from the three assistance levels, plus it shows your remaining charge and current speed. As previously mentioned, the power isn’t all that subtly added, but the system’s torque sensor is clever enough to recognise when you want maximum assistance via the force you’re putting through the crank.

In this scenario, it turns the juice on straight away, whereas more gently turning the pedals sees it instead added gradually.

One facet of the hub-motor system is that if you get a rear puncture, you’ll need to pull apart the connecting joint on the wire between the battery and motor before you can get the wheel out. Easily achieved, this bike came with it cable-tied in place, making things somewhat trickier.

Generating very little in the way of drag, my only major gripe with the system is how whiney it is. Easily audible at a continuous level across all assistance modes, I found it annoying at times.

Made of aluminium, the term stout suits both the Carrera’s frame and fork. Feeling like it’d demolish the upper story of your house if you left it on your car’s roof rack while entering your garage, given the bike’s weight, this is reassuring. At the same time, it means there’s not much going on to dampen impacts from the road, which is instead left to its big tyres.

More practical than lovely, the tubes are all plain in profile, there’s no hydroforming, the headset is external, and the welds are industrial. Still, I’m not sure any of that matters, as functionally it does the job, and even manages some fairly neat internal cable routing.

With mounts for mudguards and a rack, the main thing that irked me was the lack of any water bottle bosses.

The Microshift R9 shifter feels clunky given how nicely Shimano’s cheap shifters now function. However, once you’re used to the long lever throw and full-bodied recoil, it gives no reason to imagine it won’t be durable. The 9-speed Shimano cassette and Acera derailleur are both decent quality, while the KMC chain and single-chainring SR Suntour crankset (complete with trouser-guard), mean there are no suspect components in the rest of the drivetrain either.

The brakes follow the same pattern. Tektro Mira models, they’re basic but hard working. Most important is that they’re there. On an e-bike, you don’t want conventional callipers or v-brakes; not just because of the extra power and weight of the bike, but because of the way rim brakes will quickly devour the wheels.

Speaking of which, the wheels on the Carrera also seem pretty solid. Supposedly e-bike specific and with 36 spokes, they should be tough.

Fitted with 32c wide Kwick Trax tyres, these come up a little narrow, yet do a good job of both supporting the Crossroad’s extra weight and allowing it to travel over a range of surfaces including gravel. With space to go bigger, you could even convert it into a proper off-roader, or just add mudguards.

Although heavy, the Carrera Crossroad’s weight is evenly distributed. Somehow, even with the power off, it also never feels a chore to ride, despite its mixed-terrain ability. And with the motor on, it positively rips along.

The parts are good when you consider the budget, and I don’t mind its agricultural looks. Bike snobs might reckon it’s gangly and wish for swankier kit or a svelter frame.

Yet given how well all its fundamental elements work, I can’t imagine anyone buying this bike being unhappy with their purchase. All in, the Carrera Crossroad is a fun if slightly unrefined e-racer that provides power to the people.