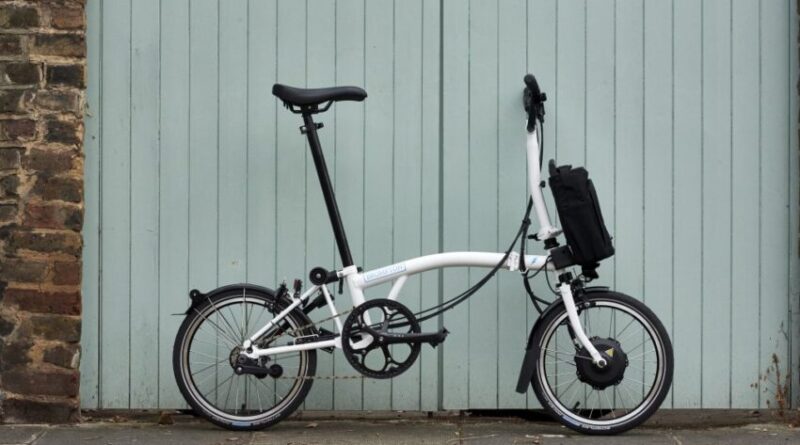 Cycling as transport and cycling as a sport/hobby are two different things and with more people looking to avoid public transport as much as possible this bike is firmly in the transport category.

Brompton’s motor is intelligent. It doesn’t just whizz up to full bore at the first pedal rev. Instead, it reacts to you, judging pedal torque, cadence and speed via a bottom bracket sensor before providing you with the assistance you need.

The Samsung lithium-ion battery then kicks into action giving you the power needed for that particular time to a range of 250w. It’s a smart bit of kit that considers how much you need rather than just give you everything.

What this makes for is a spritely kick off the line. Putting down the pressure at a set of traffic lights, you are comfortably the quickest thing off the mark, propelling clear of other traffic in an instant.

To my delight, I found myself with plenty of breathing room ahead of fellow cyclists, motorbikes and London buses when pulling away without having to dig deep into my soul to get the 16kg frame shifting.

When you get going, the motor then sends you into cruise mode. I could stop thinking about the physical effort of cycling when riding around town and instead concentrate on the busy traffic and the beautiful sights around me.

Honestly, you could spend an entire day rolling around a city on this electric Brompton without a second thought to whether you’d get all hot and sweaty or you were going to tire yourself out.

What also surprised me is that despite the weight of the bike, the motor was powerful enough to drag me up some challenging gradients.

I’m pretty confident that the electric Brompton would proove a match to any city’s terrain, no matter how hilly it is, especially considering Brompton also has this bike in six-speed as well as two.

The battery will then also recognise when the pressure was off, say descending a hill, instantly reserving its juice for a later date.

To save battery, you can also run the motor at three different intensities, although I only ever found myself opting for full whack.

The battery sits neatly above the front wheel operating a rear and front light if you need it to while also including a nifty port to charge your phone.

Give it four hours and the battery will be fully charged, enough I found for at least 7 working days of back and forth rides to the station and the office.

The long wheelbase of the original Brompton made for a stable beast but the addition of 3kg in weight has really helped plant this bike to the floor making for a smooth, stable ride.

Even the most gnarly pothole did little to throw me off course and my body noticed little vibrations from the road, such is the quality of the ride.

Ride quality is also assisted by the trusty Schwalbe Marathon Racer tyres which are wide and comfortable and everything you want from a little city hack.

With that extra weight on the front end, you would expect the handling to have been thrown a touch off-kilter but this isn’t the case.

The extra bulk on the front has done little to hinder cornering and I found that the extra zip provided by the motor allowed you to take corners with added vigour.

On the bike, I really cannot fault the electric Brompton. It became indispensable when I had it on test.

However, as it always tends to be, there was trouble in paradise.

As with all first iterations of a product, there are parts that can be refined and this is no different for the Brompton Electric.

The cabling for the rear brake and two-speed mech runs down the spine of the bike towards the rear but for the bike to fold as it does, this needs to sit on the drive chain side.

This puts loose cable precariously close to the chainring while also leaving a clump of wire near the handlebar clamp, in the way.

I also found that the latch to lock the bike in would also sometimes sneak itself in-between the chain and the chainset if the crank arms were not at the right angle, leading to greasy fingers after having to untangle it.

But by far the biggest elephant in the room for Brompton will be the weight concern. Tipping the scales at 16.6kg I found it a bit of an ordeal carrying it around.

The dead weight of it is hard enough to lug around as it is but this isn’t helped by it being such an awkward carry.

You can only get the purchase you need from underneath the saddle, which keeps the weight low and therefore harder to manage.

It also meant that when I walked any faster than snail’s pace, the bike would rock, inevitably bashing me in the leg bruising me like a neglected peach.

You can detach the battery from the bike to distribute the weight but that doesn’t solve the issue of having to carry 16.6kg, which leads me to the concern that the Brompton Electric could be quite a limiting bike.

Realistically, it was only a limited time that I carried the electric Brompton off the floor but it was enough to be a hindrance and some will not even be able to get it off the floor at all.

Yet, in all honesty, nothing’s perfect is it? So to bear down too heavy on the issue of weight would be inconsiderate to what I would go as far as saying is the best bike I’ve ridden all year.